BEEKEEPING: NOT FOR THE FAINT OF HEART 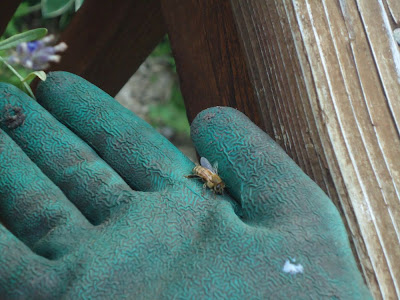 While I was out weeding the backyard tonight I saw one of my bees crawling around on the ground. Odd I thought, considering she was about 4 feet from the hive. I went to pick her up and she tumbled off my glove only to land on her back. She buzzed vigorously and managed to right herself. She started walking about so I let her climb on my glove again, this time with success, all the while begging her not to sting me. I tried to get her to walk onto a flower in front of the hive but she wasn't interested. I thought about flicking her off but I imagined she could sting faster than I could flick. I regretted picking her up, knowing full well that the gloves were thin enough to be stung through. I decided since I had been idiotic enough to allow this venture that I needed a picture. I walked slowly up the stairs onto the deck on our house and yelled for my daughter to get the camera. I watched our little bee friend groom herself, at least that is what it looked like she was doing, for about 5 minutes. Then she stopped and took what looked like a "mini" nap and then started grooming again. Rubbing her head and eyes with her front legs and then pumping her back end (hoping that wasn't a sign I was about to be stung) and rubbing her back legs over her torso. She didn't seem to mind me at all. Of course, my hubby appeared, claiming I was holding her back from her sisters and insisted I flick her off so she could fly home. I was scared but he was guilting me into it. I flicked her and SHE DIDN'T FLY!!! I watched her drop quickly to the bottom of our deck (it is a long way down) and then proceeded to yell at my husband for guilting me into killing one of my own bees. He walked away leaving me in sorrow :( I feel badly. I can only hope that she hit the rocks below like a feather instead of like a brick.
Author: Michelle at 5:35 PM

You shouldn't feel bad, she has "k wings" in that pic. There is something going on with her. She is probably having tracheal mite issues or close to the end of her life as she didn't fly when flicked and was having a hard time walking up your glove.

I'll have to read up on tracheal mites. That would be awful :(

I've been reading up on tracheal mites and another thing my bees are doing are wandering around on the ground in front of the hive. We've noticed this lately.

I wouldn't worry too much about it. Most of today's bee stocks have some resistance to the T mites. If you are really concerned, you can always give them some apilife guard and knock down their T an V mite loads pretty well.

I have a few that crawl around like that, but the ones on the porch fall through the boards to below and cannot make it back. The hive stands off my deck I built have oil traps built into the legs and have drowned the ones trying to crawl back up...

There is something wrong with those specific bees and losing them is not the worst thing. If they are infected or aflicted with some problem then it is better they be outside the hive. It could also mean you have hygenic house bees that keep everyone in the hive healthy.

Thanks Jared! It makes me feel better knowing there is a good reason for them to be outside the hive. I'll be going out today to reverse the first two hive bodies and I'll get a closer look at them and the ones wandering around on the ground and see how things appear as far as their wings and such.

Your story is great! I can so relate. I sometimes blow them off my glove, but only if I'm dealing with a single bee. I figure I should have enough lung power to overcome the weight of a single bee. I've had a terrible 5 or 6 days with my (formerly) wonderful beehive. Scared the beegeezuz (ha!) out of me but things are back to normal now. I hope to blog about it soon mostly because I want to remind myself what did (and didn't) go on.

I look forward to your post Pam! I know what you mean about reminding yourself. I always try to blog so that I have a record of this come next year when I know I'll need reminders :) (*crossing fingers of course that my bees make it through the winter).