A BOOK SUGGESTION FOR THE EMOTIONAL BEEKEEPER 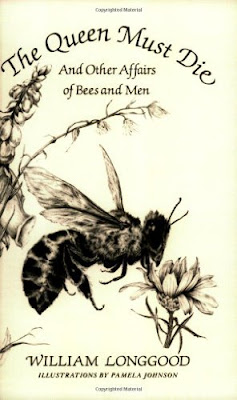 In my opinion, and this will probably rub some beeks the wrong way, I believe there are two kinds of beekeepers; those that have an emotional connection with their honeybees and those that don't. I'm not using this post to judge, I'm just stating what I believe is the obvious.

I was reading then participating in a discussion on the beesource forum where the topic posted was "kill off your bees/colony" and the poster wanted to know how to kill off their hive instead of trying to overwinter them. The discussion that resulted came down to those who are against killing off bees and those who are either proponents of killing or don't find anything wrong with it. I think anyone who reads my blog would know where I stand on the subject of killing ones own bees.

So... I am reading this book written by William Longgood and I happen to come upon the chapter in which he talks about this type of beekeeping just days after debating the kill or not kill topic on the beesource. At one point he is quoted saying "I faced a dilemma common to people who try to manage nature, when human values conflict with nature's unsentimental imperatives. That is the part of beekeeping that I dislike and often it gets in the way. Is it more merciful to kill outright or to let creatures perish slowly and possibly painfully through want of their own kind and their own elementary biological needs? The manager becomes an arbiter of life and death. I was forced to confront a decision that was distasteful to me." As I suspected. the author doesn't disappoint, he chooses the emotional over the logical.

I use the word "logical" loosely. Killing off your own bees can be logical if you see beekeeping as pure business and nothing else but if you have any emotional connection to your bees at all you wouldn't think of killing them as logical at all. Logic isn't something an emotional beekeeper can make peace with, at least not right away. People keep bees for various reasons, some do it for the honey, others for the beeswax, and quite a few people do it out of pure fascination with bees. If you are fascinated at all by the life cycle of bees and you derive more pleasure from watching them work together as a colony than you would from extracting honey, then you would never take the "logical" approach of killing them off because it doesn't make for good nighttime sleeping.

There is an intolerance amongst beekeepers as there is with people in most aspects of life. I'll be the first to admit, I don't want to make nice with the commercial beekeeper who lit his hive on fire just because they didn't give him any honey, actually, I'd prefer never to meet such a person and I'm sure the feeling would be mutual... he wouldn't want to make nice with someone who mourns the death of a single bee. But... the point of this post isn't to slag off those who have a different beekeeping style than I do, it is purely a book review and plug.

The "Queen Must Die" is the best beekeeping book I've read thus far. William Longgood has taken the logical parts of beekeeping and exposed its emotional side. He has dissected every aspect of the hobby/business and his heart is open in every word he uses to describe these beautiful insects. As an emotional beekeeper, it is nice to see someone put into words what is so hard to convey to those who don't keep bees or those who don't care if they live or die. Plus the fact that you walk away from this book with the sense that humans could learn a thing or two from bees in how we function as a society. Longgood covers a lot of ground in this book so I recommend putting it on your reading list if you aren't the one burning your hives in the fall ;)

Bees are more than a hobby; they are a life study, in many respects a mirror of our own society." ~William Longgood

I'm not sure how killing off thriving productive colonies is a good business move, you would have to replace them every year, it would be cheeper to over winter them, unless you live where bees are cheep. Not letting a highly adaptable creature like the honey bee adapt through coexistence with natural pressures and breeding habits is a big reason so many people loose their bees (imho) shipping queens from florida for some huge agro companies ten thousand hives can't be good for their survival prospects.

Michelle, I also was following that thread and really had an emotional response to it. I almost felt like, why am I going through all this work/worry/watching if all you really need to do is throw a package in a hive, let them grow, kill them off and take their honey. I guess I realized that there are options, and many, many who feel that, while there may be those who pursue beekeeping as a strict, cold business, like raising cattle to send to the packing plant, we just don't and won't go that way, and we have plenty of company. I'll be looking for this book--sounds very interesting. Thanks for suggesting it.

Hi, I love reading about your bee escapades... and it makes me want to try beekeeping myself! There are a lot of beekeepers in my area and I have been trying to get a visit to see some of the work in action. xo Jen

I came to your blog via Pam J. Thanks for the book review! This title will be on my Christmas list, for me that is, and also for my beekeeping partners. Oh, and love the term "beeks!"

I wish you were closer Jen, I'd have you over to our house to work with our bees. I definitely recommend going into beekeeping, there are so many benefits. You will find that as a soapmaker (if using honey and beeswax) your relationship with your bees will be twice as strong.

Sam,
I completely agree! I had a local beekeeper advise me to kill off my bees this fall and take every bit of honey they had stored because, as he said, I had carniolans and they just don't winter well which I've learned from another beekeeper just isn't true. He also told me that lots of beekeepers did this take and kill type of beekeeping if they suspected a colony wouldn't winter. I questioned him about the financial implications of doing something like that if you were hoping to create a business out of beekeeping (which I'm not) and he maintained that it was more cost effective to kill them and take what they had then attempting to get them through a winter. "Just buy a new package in spring" were his exact words. Personally, I think all bees deserve a chance to survive whether they are Italian, Russian, Carniolan, etc... business or no business. This is why I'm also having difficulty with the idea that Marla from the U of M advises killing off the hive in the 2nd year. I understand their reasoning for it but then again, I don't :(

I'm so glad you can relate to my feelings on this. I feel the same about the kill and take advice I received. If all we have to do is install a package and take the honey at the end of the season there really is no beekeeping education needed. As beekeepers we do a lot to make sure our little girls thrive and remain happy in their hives. It would all be useless really if after a few months we killed them and took what we could. It is a bonus, as I'm sure you can relate, to go out to the hive and just watch them work. Honey is fantastic but much of the thrill is learning about our bees, watching the hive grow from month to month (7,000 to nearly 80,000 bees), trying to make sure they are healthy and strong to get through the winter. I know for me, if my bees don't survive the winter I will mourn their loss and try to do better or different next year.

Hi Kathy, thanks for reading my blog! You will enjoy this book. I've read several books on the "art" of beekeeping, all a little different from one another, but they all focussed on the work involved with keeping the bees, where to buy supplies, etc... Although this book has a little bit of beekeeping advice it is more focussed on helping the reader understand bees by using human thinking as the analogy. The author does a great job of helping the reader see bees in terms of ones self.

I like this:
"If you are fascinated at all by the life cycle of bees and you derive more pleasure from watching them work together as a colony than you would from extracting honey, then you would never take the 'logical' approach of killing them off because it doesn't make for good nighttime sleeping."

Another book I must read. Thanks for the thoughtful review and discussion.

It is a great read Pam! I know you will enjoy it :)

I believe it was Ghandi who said, "You can judge a society by the way it treats its animals." So very, very true.

As for "The Queen Must Die"--it is probably my favorite bee book. I even made my husband read it.

I also like Sue Hubbell's "A Book of Bees," although I did not make my husband read this one ( a judgment call.) It's also on the emotional side, but I really loved her sense of responsibility to the bees. It is well written and honest.

Thank you Rusty for the bee book recommendation. Sounds like another one I'd love to read! That quote by Ghandi is perfect, thanks for sharing!

I am reading this now and it is probably my favourite bee book of all the ones I've read. Highly recommended! :)

Michelle, I can't wait to get hold of a copy of this book! I was rereading some of our info from beek class and this time actually started crying at the thought of intentionally killing my bees. We've gotten so very attached to them this year- I can't imagine doing that. Also, Dixie (tri-coloured collie) cries whenever she finds a dead bee- imagine how well killing the bees would go over with her!

Are you still on Facebook? I realized I hadn't heard from you in a long while. I hope all is well.
:)

If you'd like me to send you my book I can. I have a package I'm sending you soon, I can slip it in there.

I'm not on facebook anymore. I deleted my account because I was spending too much time online. I miss all the connections but I knew if the account existed I'd find reasons to spend too much time on there :(

I know exactly how you feel about killing off the bees. I'm even having bad images cross my mind of my bees starving to death over the winter and finding them with their little heads buried in the cells looking for food :( I sure hope they make it.

Oh, I would love to borrow it! Do you have my email address? Is there a way to send you a private message here?

I don't have your email address :( I just added my email link on the upper right side of this blog. If you email me then I can get your email privately :)