DON'T BANG ON THE BEE BOX 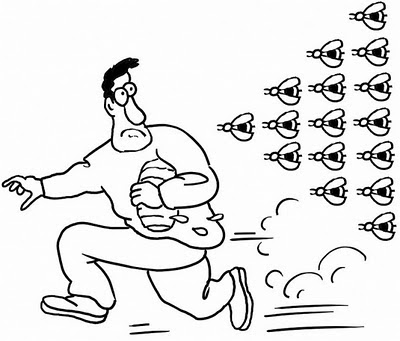 Just in case you are wondering, I don't call it a hive anymore, it is the "bee box" and today I learned that banging on it isn't the wisest thing to do. (Yes, I was thinking maybe some very loud humming not organized military attack).

I was making the new mommy mistake today. Ya know, the one where new moms get up every two hours to make sure their babies are still breathing? If you don't know what I'm talking about then you must belong to the calm mothers club. Personally, I was a wreck. After the birth of my first child I would wake to hear her breathing every few hours and if it sounded like she wasn't I'd give her a little shake. Of course this would wake her up and she'd cry but at least I knew she was ok. Well... the bees have somewhat of a similar reaction.

So I went out to my bee box and it was quiet... too quiet. I noticed the graveyard was plenty full and I started feel a little concerned so I put my ear up to the box and as I thought, I heard nothing. Paranoia, fear, uncertainty, whatever you want to call it, came creeping in so I gave the box a little tap and....... NOTHING. I tapped again and again until I noticed that I was going full speed, banging on it like a complete nutcase and the reaction from the bee box was similar to that of a newborn baby...the bees woke up and boy oh boy were they pissed. Too pissed off to freeze. They came crawling out like it was a 90 degree summer day and I ran for my life...... or at least I ran for the safety of my exposed skin.

Well, at least I know they are still alive right!?! :)

Now that I'm somewhat over that trauma I need to go read up on candy board recipes because I think the girls are going to need it.
Author: Michelle at 2:04 PM