Author: Michelle at 7:41 AM No comments: 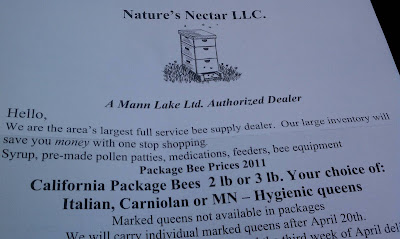 It is that time of year again, when beekeepers in Minnesota decide whether or not to add more bees to their existing apiary. Right now I am trying to decide if I should order 2 or 3 packages. My girls don't appear to be surviving this winter very well.. I will know more in February when hopefully the temps are high enough for me to crack open their hive and get a good look. I went out yesterday and tapped on the hive but there was no hum, no flight. I checked again today, no tapping, just observation. I saw one bee at the hive entrance so at least a few are survivng. Unfortunately we have two months of winter left.

I am still optimistic as my little girls have surprised me before.

Published with Blogger-droid v1.6.5
Author: Michelle at 2:30 PM No comments:

I FINALLY DID THE NETI POT 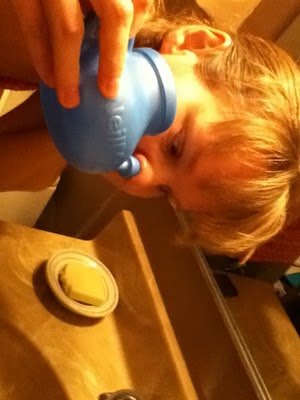 For over a year now my friend Angie has been trying to convince me to try the "neti pot." I had read a little bit about it several years ago but the thought of running water through my sinuses brought back bad memories of the time I almost drown,

Last year an herbalist told me that I would need to get rid of my dogs. Turns out they are the cause of a persistent glob of mucus I've had in the back of my throat for the past 15 years. Again, Angie told me to try the "neti pot". On top of the mucus issue I have a deviated septum and, therefore, am susceptible to colds and never have free flow of air on one side of my nose. Again, Angie told me to try the "net pot."

Actually, Angie should be a spokesperson for the "neti pot" manufacturers because she does a very convincing sell of the product. She sold me 100x's over until I got over the fear that I may die during the process.

I was pretty ill since December and so I worked up the courage, with Angie on the phone talking me through it of course, to give the "neti pot" a try. I was hoping the little saline mix in the water would prevent that feeling of drowning but it didn't. As soon as the warm water rushed into my sinuses I started to panic but knew it was temporary (Again, Angie said it would pass), so I hung in there. Once I finished I did the EXACT opposite of what I was suppose to do. I blew my nose really hard. Immediately my left ear plugged up and about 5 minutes later I had annoying pressure on one side of my face. I bitched and moaned about how I should never have done the darn "neti pot" and my ear would be just fine. 15 minutes after that my nose let out a mini burst of water and the pressure and plug were gone. Once I calmed down about the entire experience I realized I was the problem and not the "neti pot." I didn't follow the basic instructions which state: DO NOT BLOW HARD afterwards. (moral of that mini story: follow directions).

Because this was the first time in many years that I didn't feel a blob of mucus in the back of my throat I continued on daily with my "neti pot" treatments.

Result: Angie was right! Not only do I now sleep without choking on my own snot but my facial congestion during my illness was nowhere near as bad as it could have been. Everytime I felt the congestion coming I would flush my sinuses and I was good to go. The plus in all of this is that my breathing is actually much clearer than it was before. No, my septum didn't miraculously correct itself but it isn't anywhere near as difficult to breath on that one side as it was before.

I've posted a picture of myself doing the "neti pot" - not the best picture (yes, I just woke up, yes, it is early in the morning). I thought it would be better than some random pic off the net that no one can relate to. Trust me, if you are at all aprehensive about trying this I assure you that if I can do it, so you can you :)

If my readers have no clue what I'm referring to, please read the following. There is even a video on how to use the neti pot.

DOES THE NET POT REALLY WORK?

WHAT IN THE WORLD IS A NETI POT

WHY NETI POTS ARE POPULAR
Author: Michelle at 1:14 PM 9 comments:

Email ThisBlogThis!Share to TwitterShare to FacebookShare to Pinterest
Labels: Health

Published with Blogger-droid v1.6.5
Author: Michelle at 2:08 PM No comments:

All I can say about this article and video is... BUY YOUR HONEY FROM A LOCAL BEEKEEPER YOU KNOW AND TRUST!

What consumers don’t know is that honey doesn’t usually come straight – or pure – from the hive. Giant steel drums of honey bound for grocery store shelves and the food processors that crank out your cereal are in constant flow through the global market. Most honey comes from China, where beekeepers are notorious for keeping their bees healthy with antibiotics banned in North America because they seep into honey and contaminate it; packers there learn to mask the acrid notes of poor quality product by mixing in sugar or corn-based syrups to fake good taste. 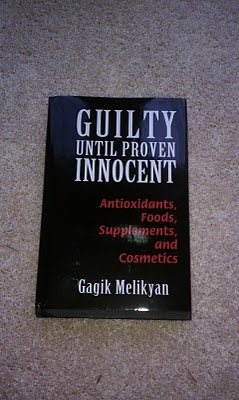 I was doing some research on the chemical preservative phenoxyethanol when I came across the book "Guilty Until Proven Innocent" by Gagik Melikyan, a must read for anyone who makes, sells or buys body products. (yes I bought and read it)

Small Bio on Gagik Melikyan:
Gagik Melikyan is a Professor of Chemistry in the Department of Chemistry and Biochemistry at California State University Northridge in Los Angeles. He is a nationally and internationally recognized expert in the field of radical chemistry. Being a highly cited author, his research has culminated in 76 papers, reviews and book chapters on radical organic and organometallic chemistry, transition metal-mediated chemical transformations, computational chemistry, natural products syntheses, anticancer drug development, and non-steroidal hormones. A devoted educator and scientist who was awarded the Outstanding Faculty and Polished Apple Awards, he has educated and trained a whole generation of professionals working in the fields of chemistry, biology, and medicine. For many years he was involved, as an expert, in protecting the American public from harmful chemicals and environmental pollutants.

In his book, he not only covers the dangers of certain chemicals in cosmetics, including parabens, but he also talks about antioxidants, foods and supplements.

He claims to have written "Guilty Until Proven Innocent" after receiving numerous questions from his students on the latest "hot topics" like the use of parabens in cosmetics. He wanted to write a book for the layman to read and understand.

“My concern is that people might be exploiting the public’s ignorance of a purely scientific issue, so I have written my book in the easiest terms possible so that the general public with no scientific background can understand it,” he said.

You can find more information here about why Gagik wrote this book: CLICK HERE FOR FULL DETAILS

An extraordinary book that provides compelling evidence that antioxidants, foods, supplements, cosmetics, and natural compounds can be harmful to the human body. It arms a layperson with the critical knowledge that will allow him/her to make educated choices and protect themselves and beloved ones from potentially hazardous substances.

The book is well written and although chemistry can be difficult to grasp the author does a great job of breaking down the science and making it as understandable as possible for the lay person.

A few quotes on parabens from the book:

"The accumulation in the breast tissue, in particular in the breast cancer tissues, was experimentally established, and third, their estrogenicity, an ability to mimic natural estrogen, was also demonstrated. If all these data are not enough to raise a red flag, then what else can?"

"From a business point of view, it is understandable that products need to be protected from premature spoilage. The question is, "What is the price that consumers have been paying for it?"

He goes on to discuss what happens to chemicals when they enter the body. It is a very profound read for anyone who has taken the lack of oversite from the FDA on the cosmetic industry seriously.

I appreciate this authors unbiased research and delivery of information to the public, the following quote says a great deal about his integrity:

"It is never easy to go against the flow, but I decided to do that because I consider it to be my civic duty, as a scientist," says Professor Melikyan.

Hopefully he's educating many more scientists like himself :)
Author: Michelle at 9:10 AM 7 comments: 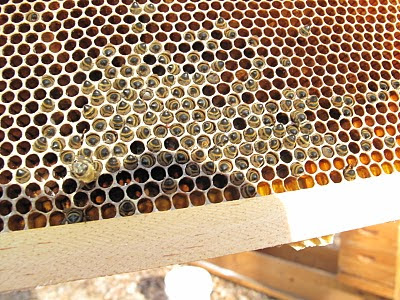 A big thank you to Jared over at JARED'S BEES for letting me share this picture.

This is the sight I dread. Little bee butts up in the air while they are face down in a cell looking for food. The bees in the above picture are all dead because they starved to death. It doesn't mean they ran out of honey, in fact, these little girls were just inches from food when they died.

Here in Minnesota we are facing one of the harshest winters in years. The snow started to fall early and the temps are below normal. The longer the winter the more I worry about my bees surviving.

The picture above reminds me that no matter how well you manage a hive we can't always prevent the inevitable :(

If only there was a way to pump copious amounts of honey into the mouths of my bees so they didn't have to do any other work besides staying warm. *sigh
Author: Michelle at 10:24 AM 7 comments: