We had a good turn out at the rally for the right to know. Lot of great speakers and creative signs. I was surprised at how many people are TRULY dedicated to this cause especially on Saturday when it was only in the 20's, we were all freezing our butts off, but... we were all happy to be there fighting for what we believe in.

If we can't stop Monsanto and their insanity right now we can at least shoot for something more plausible, like having our food labels reflect whether or not the foods we eat contain Genetically Modified Organism's. 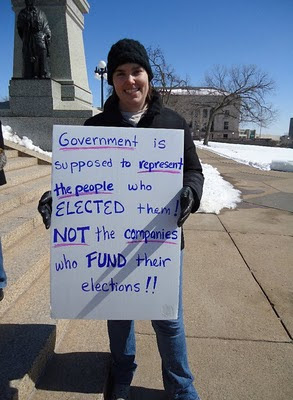 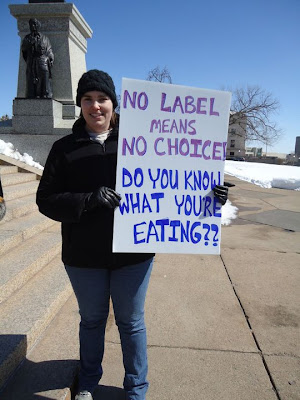 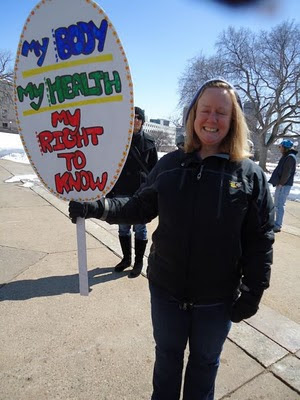 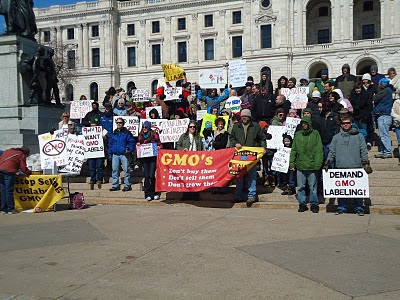 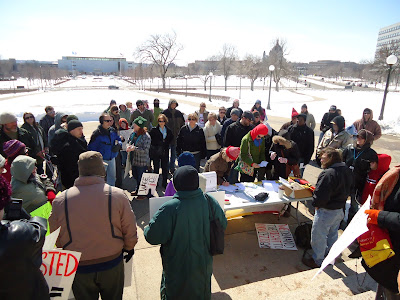 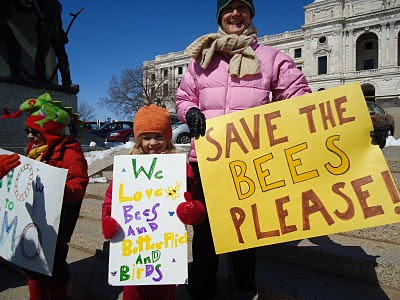 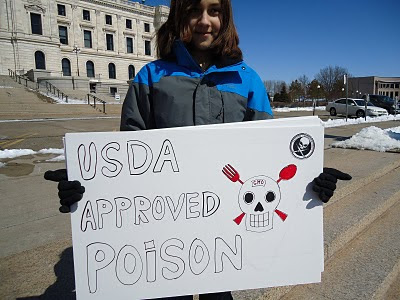 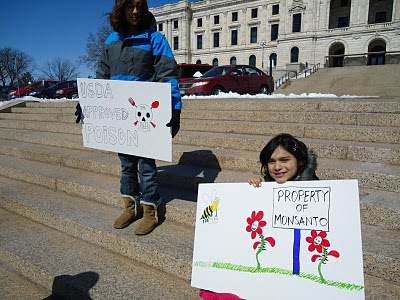 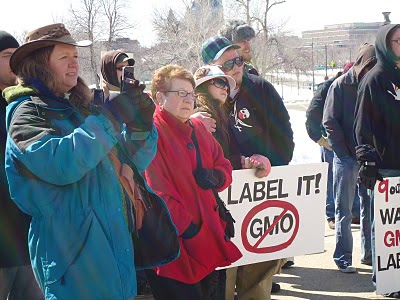 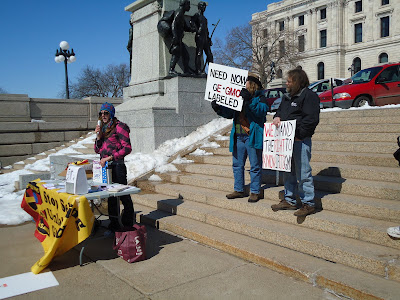 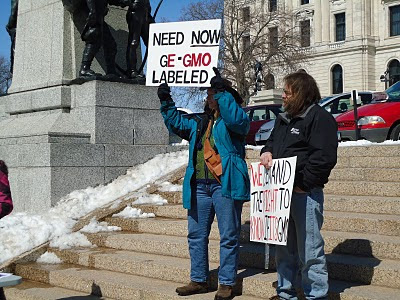 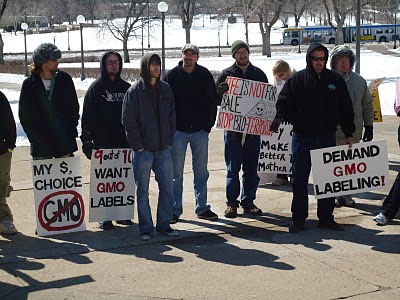 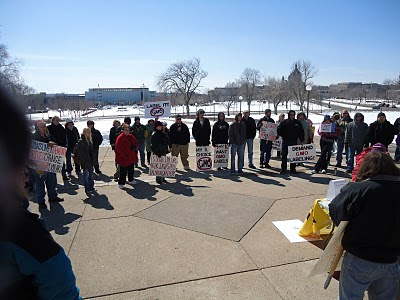 IS MY HIVE GOING TO MEET DISASTER?

My one and only hive, slowly making it through winter, is about to face more complications. 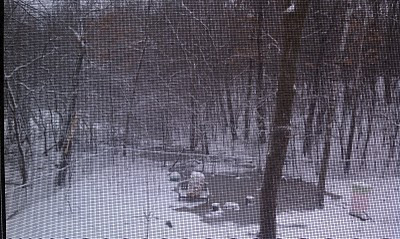 Within a few days several feet of snow melted in the back yard. It doesn't help that #1 we sit in a bowl between our two neighbors and #2 our soil is pure clay. We put our hive in a location that allowed for a significant amount of sun (most of the yard is shaded) and an area that appeared to be nice and dry the past 2 winters. Well, this winter was quite different, for the entire nation. Now you can see that my yard and the pond beyond the fence have met and they are slowly making their way to the hive. I wouldn't be freaking if it weren't for the fact that the hive nearly toppled a couple days ago and we had to shore it up with some heavy logs we had on hand. Hubby purchased a strap to wrap around the hive just in case it falls, at least it will stay in tact. When I stand near the hive I sink up to my ankles in mud and water, that part is covered by snow now. I've gotten some good advice on the beesource as to how to handle this mess so today we'll be putting the strap on and renting a dolly to move the hive aside so we can place wood or brick underneath to keep it higher than the water level. Please, all of you reading, send positive energy to my little bees in hopes that they survive. They've come through the worst part of winter, they just have a couple weeks to go.
Author: Michelle at 8:39 AM 5 comments:

If you are in Minnesota join us on Saturday, March 26, 2011 at the state capitol to demand labeling of all GMO foods. We as consumers have a right to know what it is we are eating! There will be satellite demonstrations happening all over the nation, so if you aren't in Minnesota you can check out this LINK and find where your demonstration is being held in your state.
Author: Michelle at 5:29 PM No comments:

BEES ARE HANGING ON

I've learned spring is definitely anxiety time for a beekeeper. My bees are coming along nicely but I'm not 100% sure what I'm doing at this point. I opened the hive 2 days ago and found what appears to be 5 frames of full honey and my cluster of bees was sitting on top of 5 empty frames of honey. They are able to fly out and some were even tapping into the honey but I keep questioning myself... will the cluster not get to the honey and die out?

I was advised by the experienced beeks on beesource to move a frame close to the cluster and break open some of the sealed honey to give them easier access, which I plan to do if we hit 40's and sun again soon. So far, the girls aren't consuming the pollen patty I gave them and they are very very moody. I was being swarmed when I opened the hive. I smoked myself a few times and that seemed to help.

I've signed up for Beekeeping in Northern Climates Part 2 at the University. Can't wait to pick Marla Spivak and Gary Reuters brains again.
Author: Michelle at 5:15 AM 5 comments:

GENETICALLY MODIFIED: WHAT IS IT EXACTLY? 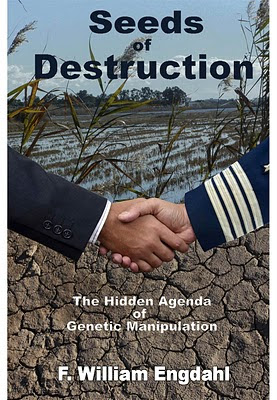 Several years ago I picked up some protein powder and as usual, read the label. I was looking for things like fat grams, sugar, etc.. What I saw was "no GMO's." No GMO's? When you see something like that on a food label you have to wonder what it means. Clearly if the label says it doesn't have it then it must be a bad thing, right? Well, I was content just knowing there were no GMO's in my protein powder, whatever that meant.

Fast forward a few more years and I'm eating a papaya in Oahu. The best damn papaya I've ever eaten. I don't like the Mexican variety because, in my opinion, it smells like feet, but Hawaiian papaya smells like a sweet flower and tastes wonderful. It wasn't long before I became addicted, eating about a dozen in one week. A couple years later I returned to Oahu to discover you couldn't find a single papaya anywhere :( I inquired at a grocery store as to the whereabouts of this succulent fruit and the grocery clerk tells me they were removed because there was a protest over them being genetically modified. What the hell does that mean? (I wondered that, didn't say it out loud).

I don't remember how I acquired my knowledge on GMO's at that point but I was way off base. I initially believed that GMO's were hybrids. Hybrids being crossbred/pollinated. You take the best characteristics from one plant and insert it into another to create a desirable quality. Why would people have a problem with that, especially since cross pollination can even happen in nature. Well, I finally get it.

In the past year I've been learning quite a bit about Genetically Modified Organisms. GMO's and Hybrids are not one in the same. To create a hybrid plant, non invasive methods of cross pollination are used. To create a genetically modified plant scientists alter the DNA of a particular plant. The purpose of GMO's is to create a hardier plant, one resistant to disease and pests. Sounds great on the surface but beneath it is very detrimental to our health.

In 1998 Dr. Arpad Pusztai, a world expert on plant lectins, was petitioned to study GMO's. During his research, after feeding GMO potatoes to rats, he found that the potatoes had a negative affect on the rats stomach lining and immune system. When he released his findings he was suspended and lost his contract.

Now I won't go into detail about how government is in bed with Monsanto, the creator of these GMO patented seeds, or how half of the former Monsanto employees now work for the FDA, if you want to learn all about that insanity I suggest you read the book "Seeds of Destruction." Warning: You will lose sleep.

Monsanto developed rBGH, that lovely hormone that is injected into dairy cows to make them produce more milk faster than normal. Thanks to this quick over production of milk, cows developed infections that needed to be treated with antibiotics. Now our non-organic milk varieties are full of hormones and antibiotics.

What I want you to know is simple.

1. The FDA isn't regulating Monsanto
2. GMO's have not been thoroughly tested for safety.
3. There are many countries around the world that have banned GMO's.
4. You are eating GMO's every day unless you eat 100% organic.
5. These genetically modified crops will put our organic farms at risk.
6. Monsanto is sucking the life out of small farmers.

For now, it doesn't look like GMO's are going anywhere. They are much like the tobacco industry, big and powerful but when they fall they fall hard... and they will fall. To start, we need to begin with labeling. We as consumers have a right to know what is in the food we buy. If we don't demand to know then we are no different than cows being lead to a slaughter house. Let President Obama know that you have a legal right to make an informed decision about your food:

Say No to GMO's
Non-GMO Project
What are GMO's
Calling all activists: Truth in Labeling Campaign
Food.Inc

Author: Michelle at 8:25 PM No comments: