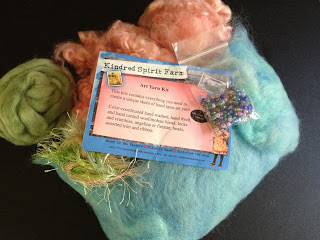 I meant to blog about this sooner but...

While I was at the Shepherd's Harvest Fiber Festival in May I learned that Minnesota had one Fiber CSA and of course I wanted to join immediately.  I like the idea of having raw fiber mailed to me every couple months for two reasons:

2. I get to experiment with different types of wool, different colors, and in different stages.  Some of whats been sent to me is raw and some is all ready to spin.

I received my first bunch of fibers in June (also included was a nice knitting pattern for a wool sweater).     One bunch of fiber was a wool/mohair mix, colored beautifully and ready to spin.  The other bunch was raw lincoln long wool.

If anyone is interested in a Fiber CSA the one I signed up with is Kindred Spirit Farm.  They send a variety of fibers (some dyed and some not) every two months beginning in April.  I missed the April deadline so I was sent my April and June portion of fibers together at the end of June.  Generally the fibers arrive at the end of the month (April, June, August, October, December, February).  Right now I'm waiting for my August shipment.  I've been pretty busy with other things so I haven't processed or spun any of the fibers but I'll be working on that next week :D

Does anyone else have a fiber csa near them?  I'd be interested in signing up for others - the more variety of fibers I can work with the better.
Author: Michelle at 9:53 AM

I'll have to ask around but we don't have a Fiber CSA that I know of. I wonder if Kindred Spirit Farms would let me sign up with them if I can't find one around southern IN?

It'd be like having it be Christmas every month! :)

Hope you find lots of other fibre csa's to get your wool. Can't wait to see your finished project (hint, hint). :)

It is fun to get the package and be surprised about what types of fiber I've received and which colors. Today another package came (the August fiber) and she sent two different sock patterns to knit. I'd better get busy. I think you can sign up. I am pretty sure when I filled out the paperwork that it had an option on it for out of state shipments.

You might have to wait a lonnnnnng time. LOL! Sometimes I stock pile my crafts - sometimes the pile just sits and sits and sits. LOL!

M, I went to their site but couldn't find where I could sign up. I'll have to check again...maybe after I scout around here to see if I can find a more local source. Thanks so much again for the package!! I looove that roving. Funny enough, I had also bought roving for you...we'll be shipping roving back and forth to each other. LOL!

I meant to ask something else, but I'll send you a quick email. :)

I just clicked on the link and it looks like they have completely changed their website. They must be redesigning it because the Fiber CSA link goes to a generic template. Hopefully they finish updating it soon. If you can't find one locally let me know and I can email you the owners email so you can connect that way. I actually contacted her through email and not through the site and she just sent me a pdf of the CSA membership info to fill out.

That is so funny, about the roving. It will be fun to send fiber back and forth. I love surprises. Now I want to hunt down some unique fibers to surprise you with :)