All I did is dream about bees last night. Trying to remember everything we learned. Scraping queens cells off to avoid swarming, inspecting for mites in spring and fall, how to lay the frames down to avoid killing the queen, etc... Is it normal to be as nervous as I am about all of this?
Author: Michelle at 8:16 AM No comments: 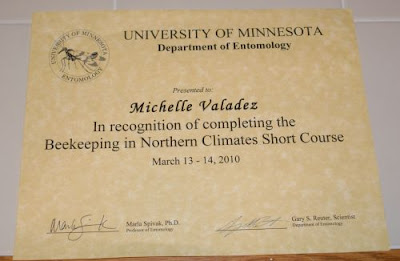 Not quite a beekeeper yet but 1/2 way there. I finished my 2 day 16 hour beekeeping course at the University of Minnesota. It was FANTASTIC! You'd think after sitting for so many hours I wouldn't want to do it again but it was full of information I kept wishing the time would tick by slower. Our professor said we need to come back next year, after we successfully winter our first hive, for the advanced beekeeping course so I guess I'll just have to hold off for more info. Now it is time to prepare for bees.

First order of business, talk to the neighbors. I wasn't going to do this but I've learned that it is important because they may be allergic to honeybees and that would be terrible. Tomorrow I plan on visiting the neighbors on each side of my house and let them know I have intentions of keeping bees and whether or not they have concerns. I'm a pessimist by nature so I'm thinking they aren't going to like it too much but hoping they will surprise me.

If my neighbors are allergic I'll be holding off til next spring to get my bees, buying property up north so I have a "faraway" place to keep the new hive. I'm hoping that won't be the case since I know I'll forget much of what I learned in the process of waiting til 2011 but I may not have a choice.

I'm excited and nervous at the same time. I'll be studying bees for two full days (16 hours) total. I received a message telling me that 250 people have signed up for the course. I keep wondering what classes will be like. With such a large number of people attending are we going to be able to ask questions? Will everything be done by slideshow? The last time I was in a class with more than a 100 people was in college and I didn't like it because I was just a number and it created a limit on learning but hopefully this will be different.
Author: Michelle at 5:54 AM No comments:

I KILLED MY OWN SOAP 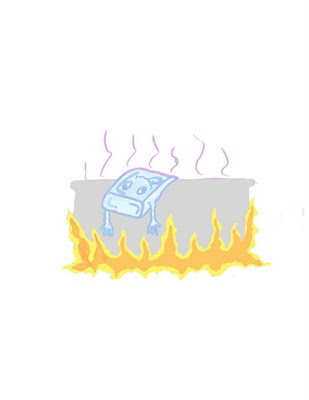 Nothing urks me more than finding a fragrance oil that I absolutely love, can't wait to use, and then have it turn out badly. Oh wo is me right. Seriously, I'm about to have a nervous breakdown over this.

What causes this curdled mess you ask? Well in my case it would be temps too high. I learned this the first time I had this happen so you'd think I'd be a little more vigilant the 2nd time around. Um... no. I noticed my temps were really high and I ignored it. I still have no idea why I did that. Maybe I'm getting complacent. So note to self and note to others... to avoid curdling its best to keep temps below 120 but not too low or that can curdle the batch also. I never soap under 100.

So now I'll go sulk in a corner, maybe pet my dog and realize in the scheme of all things the fragrance oil wasn't really that important anyway.
Author: Michelle at 7:54 PM 12 comments:

NATURE: SOLELY FOR WILD ANIMALS AND THOSE WHO RESPECT IT! 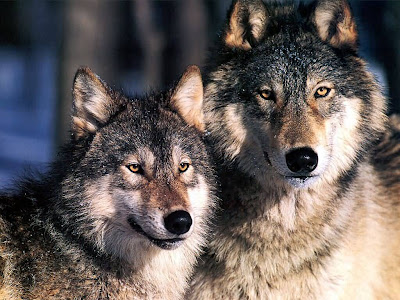 Haven't we carved enough space out of this planet for us? Do we really need to start invading the space that our wildlife occupy and then complain that somehow the wildlife is a burden because they are there?

I was at the bookstore the other day flipping through National Geographic. The cover was a picture of a beautiful wolf, my most favorite creature. On the cover in bold white letters were the words "WOLF WARS." Of course, I couldn't walk away, I had to look inside. I intended on reading the article but I don't know why since I already knew what it was about but it didn't matter, I got side tracked by the pictures.

In One photo a hunter proudly displays a dead wolf with a rifle laying across its carcass, another was of a man overlooking the bones of a dead elk but the photo that left me in disbelief was the one of several hunters holding up signs protesting the protection of wolves. One sign read "Don't you care about the elk and deer." (or something to that affect). I literally laughed out loud. Um... so we are suppose to care about elk and deer if a wolf kills it but not when a man kills it? Last time I checked American hunters had enough money to buy a gun and hunting attire so I don't think they are experiencing an inability to buy food so if anyone has rights to that elk and deer it is the wolf, the one creature in nature that relies heavily on that elk and deer for survival. Even Native Americans managed to co-exist with wolves in a time where hunting animals for food, clothing and weaponry was a necessity, so why can't modern day hunters do it?

Some of the main complaints about wolf populations:

What most people aren't aware of is that farmers are compensated for loss of livestock due to wolf attacks.

How farms are compensated

Guess what? Now they are being compensated for the loss and for the kill. Looks like farmers get to have their cake and eat it too!

2. Wolves are dangerous to humans:

This is NOT TRUE! My neighbors dog is more dangerous than a wolf. Statistics on Dog Attacks
One comment I read on a wolf protection forum was a hunter saying he hated being referred to as a Red Neck just because he advocates killing wolves. Well, when you spout idiocy and clearly show that you have no education on the matter of wolves, what else should you be called? Uneducated opportunist are the two words I use.

Only 17 cases of people killed by wolves were found in the last 50 or so years in the whole of North America, Europe and Russia - 50 people in a human population of roughly a billion people. Facts based on the last study

Here are a couple of comments I've read on the net by those who support killing wolves:

anybody who has a problem with killing wolves OBVIOUSLY does not have them living in their back yard!! well I do and i cant even let my kids outside to the back yard or walk to the bus stop!!!

Good job. We dont have any wolves here but have coyotes. They are nothing but a problem. Could not imagine how much damage wolves would do. I have to let my dogs out at night wearing my revolver or carrying my rifle to protect them against the yotes.

Now the wolves do have the right to be in idaho, ONLY if they are held in check. Those of us that listen with both our ears know that there are similarities between wolves and Obama.

A sense of entitlement anyone? Why do so many Americans believe that we somehow have more right to this land than any other creature? and how does someone go from explaining why they hunt wolves to comparing a wolf to Obama? As for the coyote comparison to wolves. My backyard is full of coyotes. The city warned us to keep an eye on our small children and little dogs. Ok. So we have to be more cautious (with coyotes), you don't see me advocating killing them, you see me following common sense practices of not letting my 3 year old and chihuahuas run unattended in the woods behind my house. Something a parent should be conscious about anyway!

One person even posted that those of us not afraid of wolves only feel this way because we've never seen one in the wild or heard one while camping outside. Well, both happen to be untrue for me. In 1991 while traveling through the Shoshone National Forest I had the privilege of seeing a wolf. It was a very unusual experience but one I'll never forget. We also have wolves in Minnesota so they are often heard in the evenings while camping up north close to the Canadian border. The sound doesn't elicit fear in me, it creates a sense of wonder and beauty. When someone is afraid of seeing or hearing a wolf it means they've been watching too much t.v.!

Bottom line is, if you can't respect wildlife then stay in your house. Animals have a right to be on this planet just as much as humans and if you don't know what a magnificent creature is then it is time to start acquainting yourself with something more than just a rifle. Hunting has its place but its place isn't killing wolves for sport or out of fear!

NRDC FACTS ON WOLVES
Author: Michelle at 9:17 AM 4 comments:

Been busy around the house and with the family lately so I haven't had time to organized my thoughts in order to make an interesting post. Rather, I've decided to post now about various things since I hate leaving my blog to collect dust.

#1 Carrie over at Under the Willow Gifts is having a Spring Giveaway of her natural laundry soap. Don't miss it! Her laundry soap is fabulous. Works better than anything on the shelves at the market and smells 100'x better. You'll fall in love with her laundry soap after the first use!

#2 If you want to break my heart, become an old dog with arthritis. Every morning I wake to find my little old girl sleeping on top of the heating vent. Sometimes I'll bring her to bed with me (but I'm somewhat allergic so it doesn't always work out), but the days I can't snuggle with her she finds ways to warm her old bones. It is so sad to see our pets age :( 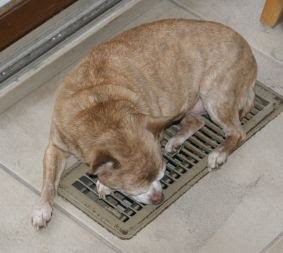 #3 Made some fun products for a custom order I received. I'm really loving the clear solid lotion containers - They are the perfect size! 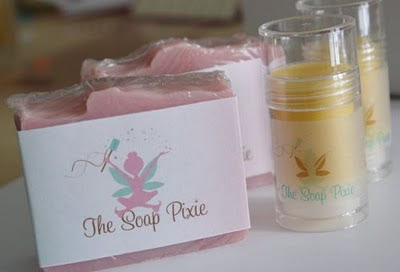 #4 Never seen an owl in the wild. The other night my hubby pointed out that one landed on the roof of my neighbors house. I was so excited I had to take a picture. The picture is awful :( but it was my first out door owl experience so... can you see it? 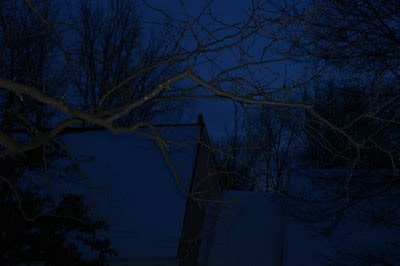 #5 Just received my bella swap. For anyone who loves rubber stamping you must get bella. She is soooooooo stinkin cute. There is one for every occasion. I'll be making a bunch of bella cards for my etsy shop (which will be up and running this spring). 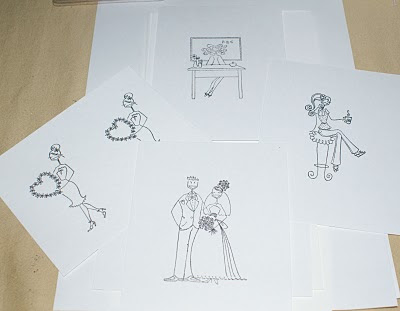 #6 My beekeeping course starts next weekend. I received a letter telling me that 250 people are enrolled in the course. Very exciting! Can't wait to learn and blog about my experience. 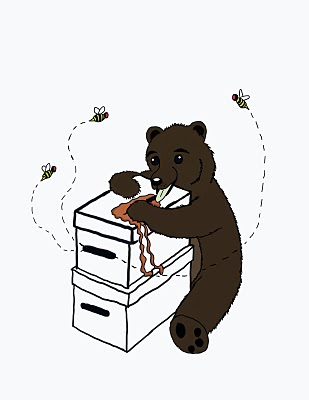 My hubby loves drawing me pictures. This was his latest.
Author: Michelle at 7:10 AM 10 comments:

For a few years now I've been teaching soapmaking to people as they've expressed an interest, even one person who intends on creating a new business out of her new venture, so I thought, why not offer classes on a scheduled basis.

Beginning March 18 I will be offering beginning soapmaking classes for one or two people at a time in my home, so if you are in the area (St. Paul, Minnesota) and would like to learn the art of soapmaking, please give me a shout: michelle@thesoappixie.com
Author: Michelle at 8:31 AM 3 comments: