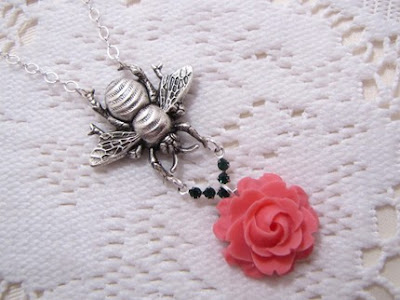 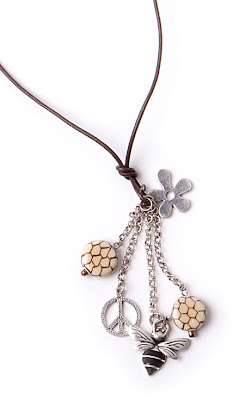 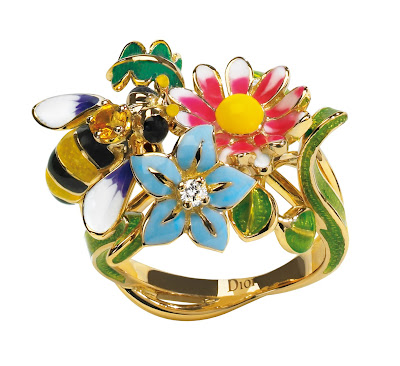 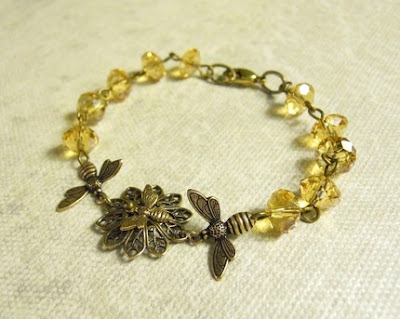 UNDER THE WILLOW: DOG SHAMPOO 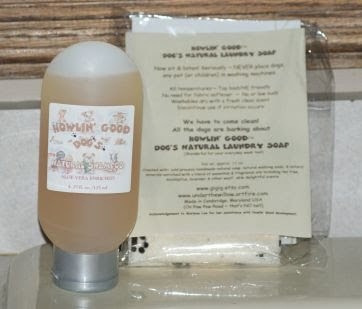 Carrie over at Under The Willow Gifts has created some great dog shampoo. I recently purchased a bottle from her for my little ones (I have three chihuahuas) and decided to give it a go. Normally, they hit the groomers, but since my oldest isn't doing well on trips away from home and the others don't like to go anywhere without her, we've decided to do their bathing ourselves.

Here is my oldest getting a clean coat 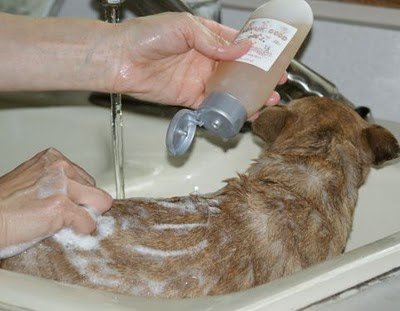 Enjoying the warm water and massage: 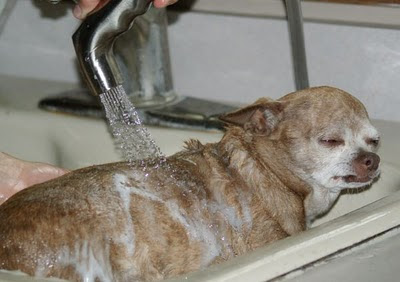 I really love this dog shampoo.

Carrie was also very sweet as to send me two bags of laundry soap for cleaning my dogs bed and fluffy toys. Thank you Carrie!!

Please check out Carrie's store at:

ART FIRE
or at her website
UNDER THE WILLOW SHOP
Author: Michelle at 4:00 PM 8 comments: 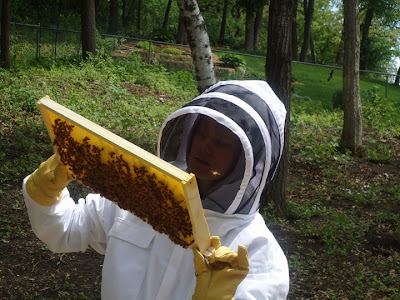 First off, I seriously should stop watching that U of M video because everytime I watch it I play the scenario out in my head how things are going to go and it never ends up that way.

Before I went to the hive my heart was racing like a ran a dang marathon. Not knowing what to expect when I lifted that inner cover was enough to cause a coronary. My problem is, as I now realize, is I treat those bees like porcelain dolls "oops honey, I'm sorry, could you move a little to the left?" or "OMG! I think I killed one" or "Oh dear, is that one alive because it looks like somethings wrong with it." Who talks to bees like that??? Um.... ME!

I should regain composure before doing this blog post but I want this whole venture to be about honesty. So here is honesty: I sucked at the hive inspection, I was drenched head to toe in sweat because I was so damn scared and guess what, my bees were angels. Go figure! I imagine if I could see their little faces they were snickering at how inept I was at my first peek inside their world. But I'll come to terms with that later, for now, this is how it went.

Went to the hive, opened the outer cover then the inner cover. Went to remove a frame and hubby had to remind me to remove the pollen patty first (yes, I'm a dork). I removed one outer frame (completely empty) and set it aside. I started removing one frame at a time to find brood. Completely forgot to count how many frames have been drawn out. Do I need to add a 2nd hive body? I'm not sure because I failed to notice that part. The 2nd frame had several bees but nothing else on it, 3rd frame had capped brood, 4th frame had brood (uncapped), 5th frame had bees but didn't notice brood. Found the queen on a frame with no brood (pretty sure it was her, she had the same clothing and that same "I'm going to eat you if you touch my babies" look on her face as she did when she arrived in the package). Immediately I remembered that video.

Disaster strikes. A damn wasp lands on one of the frames. The sucker was huge (AGAIN). BTW/these aren't those little yellow jackets, these twitches are big. I freaked out. I'm terrified of wasps and now I'm in a position where I feel like a mother hen protecting her babies from the coyote. My hubby's yelling at me to flick it off the frame but I thought that would spell disaster (my head was spinning wondering if the invader had family that would suddently emerge to attack my hive and steal their honey - what little of it they have). So I tried to cut it's head off with my hive tool and what happens, it falls down between the frames right near my queen. AAAAAAAAAAAAAAAH! My hubby's yelling at me to hurry and get it out. I'm yelling obsenities at it and I keep reminding hubby not to move too quickly (he was about to start flicking frames around), so he backed off and I went down to the bottom of a frame to cut the wasp in half but it jumped onto the hive tool so I flicked it on the ground and I ended her pathetic little life.

Good Lord, I couldn't take anymore. Just when I thought all was well I started to panic AGAIN! Forgot to put the brood together, move the undrawn frames to the center and the drawn ones without brood to the outside. Right??? Now, I honestly can't remember where the hell I put the brood frames, if I put the drawn ones on the end and the undrawn in the center or even where they were suppose to go. The temp is suppose to fall tonight to 50 and stay that way for days. For all I know I killed all the brood because I didn't put them in the right place.

Ya know, the U of M beekeeping course made this all seems so simple but when you care and I mean really really care about these creatures, it isn't that easy at all.

Afterwards when I remove my beesuit and my hubby saw how drenched I was in sweat he asked if I wanted him to take over from now on. He told me that he wasn't nervous at all so if I wanted to give it up I could. I almost started crying I felt so bad. Mind you, I'm a bit hormonal right now but I truly feel like today was a bust.

Here are the pictures hubby took of the inspection. 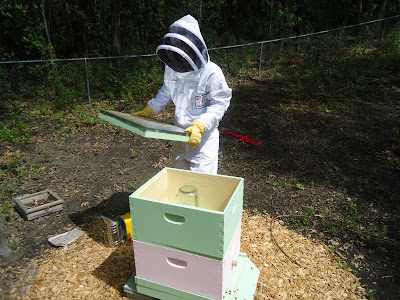 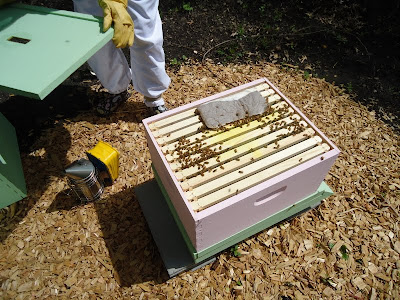 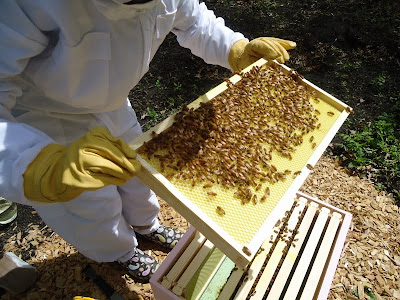 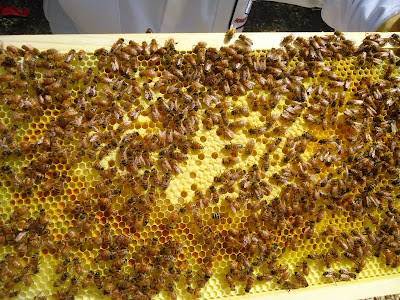 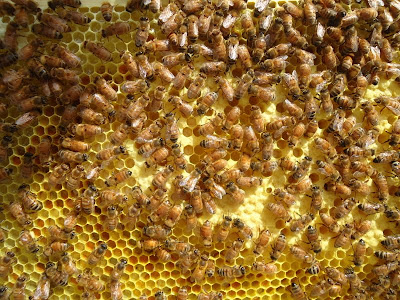 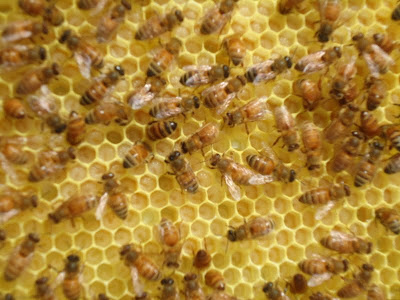 NOTE: I need to find out why the pollen patty was sopping wet and not even eaten. Plus, do some serious thinking about how in the heck I can get in and out of that hive in 10 minutes without forgetting things. This time constraint is killing me.
Author: Michelle at 10:50 AM 9 comments:

Well, my life right now is about getting my garden in order, cleaning out the house (seriously, I have a roll-off sitting in the driveway), nursing my poor hubby back to health (threw his back out last week and hasn't recovered yet), taking care of my babies (children and my bees). I've been focussing on the bee venture lately (obsessing is a better word) so I haven't been doing much creating for my website. Gawd, I feel guilty about that. Hang in there people, hang in there, it is coming I swear. I did manage to create a custom order of foaming body polish. 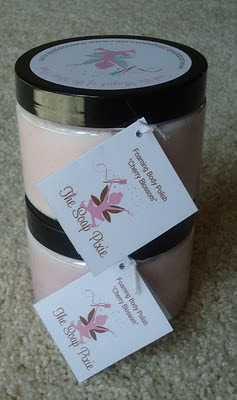 I just packed 7 bars of soap for a swap that we are doing over at We Love Soap on Facebook. Can't share them yet since it is suppose to be a surprise. The theme is all natural and I look forward to seeing what others have made. I have 7 others in my group and they are all very creative so I will definitely be blogging about the swap once the soaps arrive.

I forgot to share a few photos of our trip to Mexico. We went the first of April for 10 days to visit my in-laws. 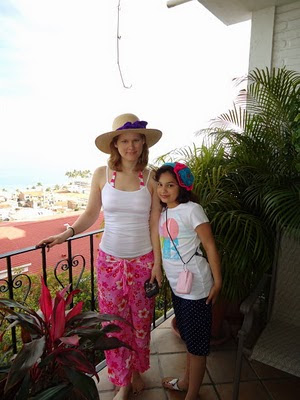 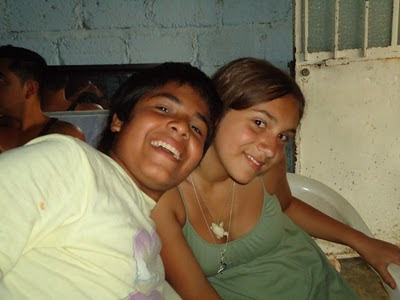 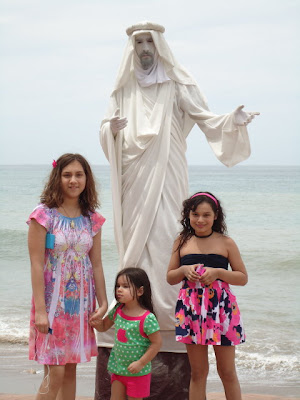 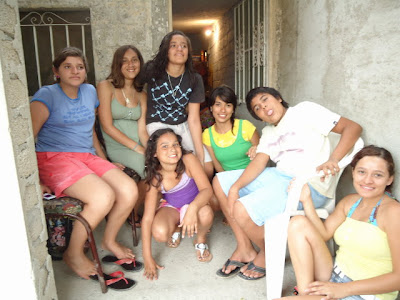 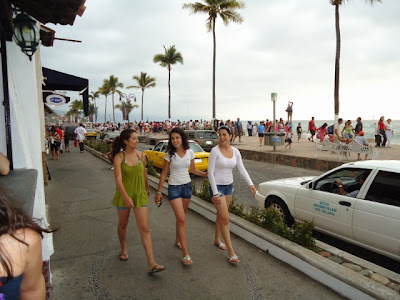 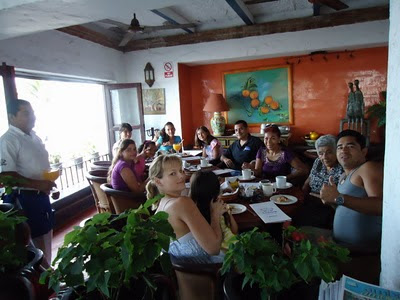 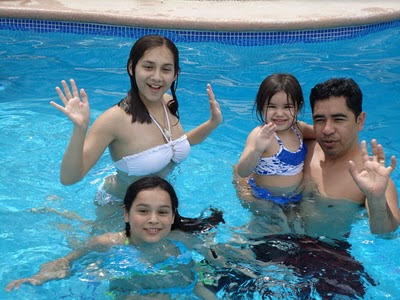 I'm also busy blogging about my beekeeping adventure over at MY LIFE WITH BEES so come check out the new pictures of my girls.
Author: Michelle at 7:06 PM No comments: 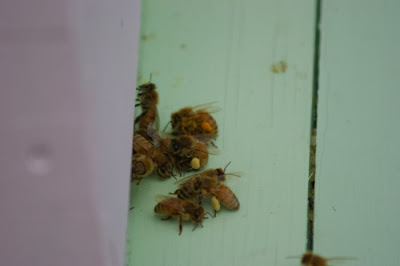 After visiting the beesource and reading some of the advice given by experienced beekeepers I decided to wait til Tuesday to do my hive inspection. It is suppose to be in the 70's and not very windy. I went out to switch out the sugar syrup for the bees and used the smoker successfully for the first time. It wasn't the first time I used the smoker, last time I used it the bees looked at me like I was insane. This time, after following some experienced beekeeper advice, I didn't smoke the entrance but I smoked under the outer cover and then shut the cover for about 30 seconds. When I opened the hive cover the bees had moved away from the inner cover opening a bit. I removed the sugar syrup container and then the bees rebounded and started walking out. To prevent myself from crushing one with the new jar of syrup I smoked them again and they all retreated far enough into the hole for me to put the jar in place again. It made me feel better about the smoker seeing it actually work this time. (now in typical Michelle nature I fear I smoked too much - grrrr with this self doubt)

When I was finished I decided to try and catch the girls working. I was hoping to get some pollen laden leg photos. Unfortunately I couldn't see very well through my veil so I just started snapping photos as they flew in. After about 5 shots I got the one posted above. I felt like I struck gold since it wasn't just one bee with pollen on her legs but 3 bees and the pollen is different colors. So very very cool!

NOTE: a big thank you to the helpful beekeepers that drop by and post on my blog and that give me advice on beesource. It helps A LOT!!!
Author: Michelle at 12:12 PM No comments:

THIS IS WHAT HAPPENS WHEN YOU HAVE RESIDUAL BEE PHOBIA

I haven't inspected my hive yet. I keep facing weather that I've learned is not the most conducive for doing inspections in. Apparently when it is windy, rainy, cloudy, the bees tend to be more aggressive. All I need to do is get through the first inspection and I know I will be fine. It is this fear of the unknown that is killing me.

I grew up with this intense fear of bees. Having seen the movie "the swarm" when I was 7 and then being stung when I was 8 just didn't make for a love of stinging insects. Although I don't have the intense phobia that I once did I still have this ingrained nasty reaction to anything that flies. If it lands on me, without thinking or checking first, I always shake whatever part of my body the thing landed on to get whatever it is off. It could be a lady bug and yes, I will react that badly, only to feel like a complete idiot later. To be even more pathetic I react this way to things that aren't even insects. A piece of string dangling in view but not yet identified as string will make me jump. I know, I'm a moron.

I had someone watch over me when I hived my first package and I have the option of having him come back to look over me when I do my first inspection as well but I really don't want to. This is something I really really want to accomplish on my own.

I know everyone who reads this will wonder why I ever chose to keep bees if I'm not 100% confident around them. My only explanation, I honestly love bees. I love everything about them. I could have sat in class at the University listening to Marla and Gary talk about bees for days and never get bored. They are fascinating creatures and I feel honored to have them living in my backyard. I'm not all about the honey and beeswax, though that would be a bonus if I manage to keep my babies alive through the winter, I'm in it solely for the education. I want to learn about these fascinating insects more than anything. I want to face up to my irrational anxieties about them and see if I can become an accomplished beekeeper.
Author: Michelle at 8:16 AM 6 comments: