I WISH I HAD THE PATIENCE...

After Gary Reuter from the University told me it was definitely time to remove the honey super that I eagerly waited to be filled with honey (but it wasn't), I headed out to the hive. The bees have been doing their own thing for quite a while now and so I wasn't sure what type of attitude I was going to find them in when they saw me. Afterall, it is September and the nectar flow is done. Hearing that lack of nectar makes for an angry bee made me nervous but I've since determined that is only when you are taking their honey, not when you are opening the hive.

Since Gary told me the honey super had to come off now I figured I'd remove it, prop it up next to the hive and let the bees find their way home. Funny thing happened... THEY DIDN'T GO HOME! They were happy on those frames and from what I could tell, by all the huddling together, they seemed cold. I waited and waited but they just kept huddling. Since I worry too much I figured I'd better get in there and help them find their way back into the hive. I removed all the frames and propped them up next to the hive but... that didn't work so I started banging frames one by one on the ground, watching hundreds of bees fall. Initially, they didn't seem to mind. It wasn't until the last three frames that a few of them had enough. I was being head butted left and right, driven far from the hive. 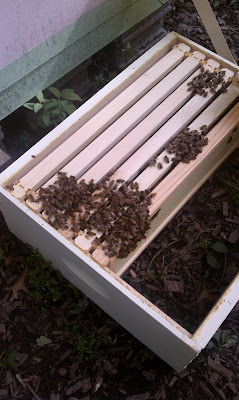 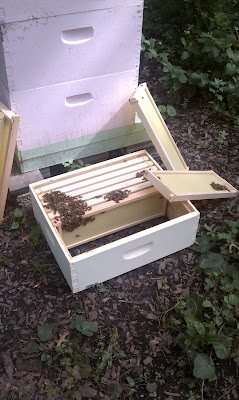 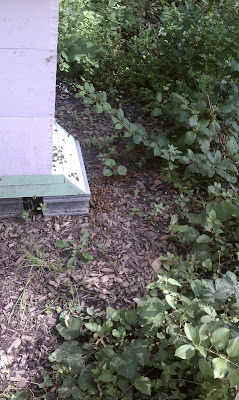 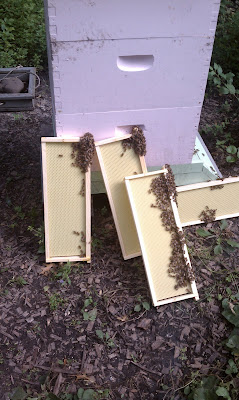 I must say... my bees have a lot of patience. I certainly would have lost my temper much sooner. One bee died when it came after me and hit the smoker (yup, it was hot). Another died when I banged one of the frames. So I counted two casualties. Even so, the loudest buzzers with the tenacity for head butting never once exposed a stinger, they just wanted to make a statement which was "WE'VE BEEN PATIENT ENOUGH NOW GET THE HELL AWAY FROM OUR HIVE BEFORE YOU REALLY PISS US OFF!"

I've realized that there is much more to learn from these little creatures then just how they make honey and beeswax. They certainly taught me a lesson in patience. They had every right to sting me, I was even prepared for it, but they weren't interested in all that hoopla. Deep down I think they know I'm a wimpy beekeeper and so they take pitty on me.

Now, the sun is shining and the temps have bumped up to a little over 60 degrees so they are out flying about. I went over to the hive in my shorts and flip flops and the had no interest in revenge... so in my world that means all is good :)

Now the trick is... getting these little girls through the winter. *sigh
Author: Michelle at 10:05 AM

Ours were clinging to the super frames even late that afternoon, but by the following morning all the bees had gone back into the hive and the frames were abandoned. You're much braver than I- I just waited for my bees to figure it out. I hate bonking bees because some of them want to bonk me back!

Under the Willow said...

I LOVE following your "bee hive" adventures"-- AND so little causalities too!

There's so much I need to learn about this new adventure (this is my first year at beekeeping too so the things I don't know could fill several file cabinets). Here's a question for you. You wrote: "... Gary told me the honey super had to come off now." The pictures look like the frames you removed had foundation only and that the bees had not started building any comb on them. Did Gary tell you to remove that super because right now -- in Sept -- bees shouldn't use their energy building comb? Thanks!

The super had been on for several weeks and the bees hadn't done anything with them. They weren't able to draw any comb at this point because of the lack of nectar at this time of year in Minnesota. It seems our nectar flow is over (I still have a lot to learn about the flowers and when the nectar and pollen is available so I called Gary to see what my next step should be) Now is the time to prepare them for winter. We need to treat for mites and also get our moisture board and cover in place soon.

If you are in a warmer climate it is probably different for your bees. What state are you in?

I'm in MD but we're getting our bees ready for winter too. I've been told that all winterizing should be done by mid to late Oct. Our nectar flow is just about over, but I do still see bees coming home with pollen---goldenrod probably, and some late black-eyed susans. I have 4 mediums and they are all full. But next week, maybe later this week, I need to do a thorough check to see what's there. The top two mediums feel heavier than the bottom two, which COULD mean there's lots of sugar water honey in the top and brood in the bottom. But that's wishful thinking...I'll only know for sure when I do a check.

Yes i had to get the clumps of bees off my empty super frames too. They were cold and sluggish but not as patient as your bees- mine got really annoyed! Mine didn't want to leave the frames either. By night time, I found I could just scoop them up in clumps with a spatula and dump them gently on the landing board and they crawled back into the hive.