A few days ago we actually had some sunshine, therefore, were able to get outside and do the partial reversal on the hive. For anyone that doesn't know what a hive reversal is, here is an image put together by Marla Spivak and Gary Reuter at the University of Minnesota to explain it: 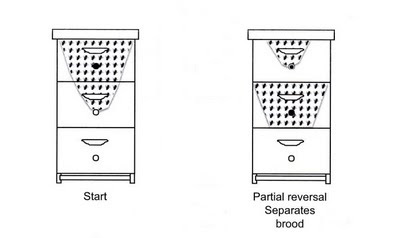 The box in the very top position gets reversed with the box the middle section.

Things went well, better than expected. The bees were great! Not annoyed with us at all. They were humming calmly. A few checked us out but weren't that interested. This time I wasn't so freaked out about the exposed larvae we found when we separated the hives. Nor did I find it as difficult as the first time to scrape and toss them. We found quite a few moldy dead bees, mainly on the outer edges. The frames on both ends of the top and middle box were pretty moldy. Gary Reuter assured us in the course I took a couple weeks ago (part 2 of beekeeping) that the bees will take care of that mold themselves.

Here are some pix from the reversal.

Being silly with the smoker: 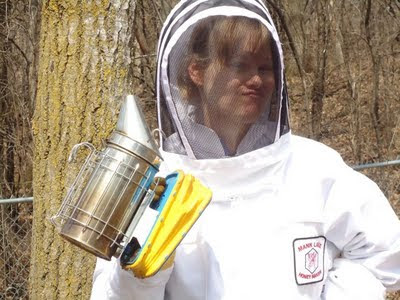 Pulling apart the hive. I did the prying with the hive tool while hubby did the lifting. Thank goodness for men because those hive bodies are HEAVY!! 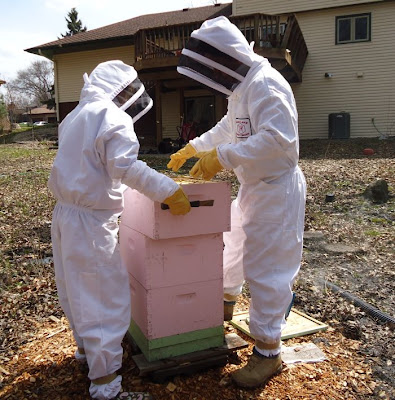 Lots of comb built on top of the middle hive body that was sticking to the frames in the top hive body. 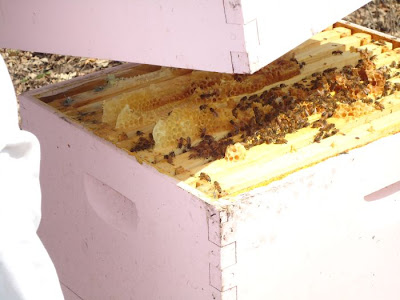 I had to scrape it all away. It was sad watching the bees huddle around the exposed larvae but, as I've been told, it has to be done. 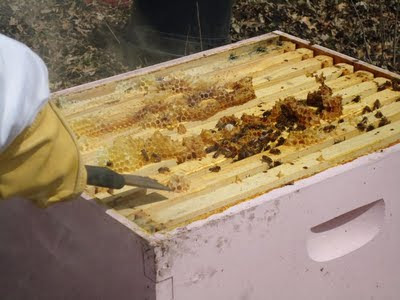 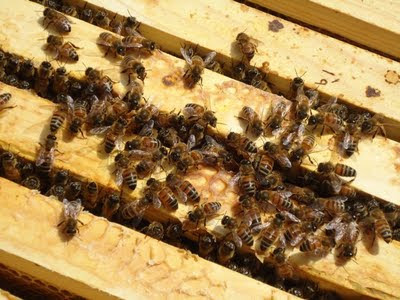 It was very cool to finally see what aged honey comb looks like. It was so pretty and clean over the summer but you can see how much it has aged. 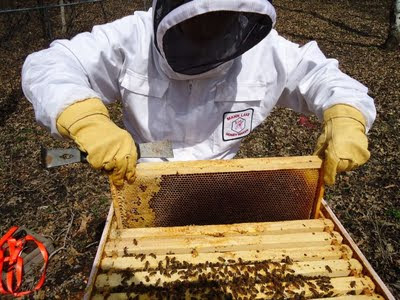 We closed things up, gave them some syrup, and then watched while the girls carried in bits of pollen. With all the rain and cold the girls won't be doing much but hopefully the sun and warmth comes around soon so they can get busy. Plus, it won't be long now and we'll have some new neighbors. The new hive arrives May 7th!
Author: Michelle at 3:26 PM

You are such an old hand at this now, M! Glad you're so confident with the hive and the girls. :)

Ok Im sorry is this sounds like a know-it-all thing, the "aged" honey come is actually brood-nest, it goes dark when the bees raise young in it from all the cocoons the pupating bees spin, when the cell is reused nurse bees just polish the old cell leaving the cocoon embedded in the wax walls, if you crush and strain honey from this dark comb tastes kind of strong. May I ask why you would want to split the brood nest like this?

Great photos, Michelle. Glad your bees made it so well through the winter. All the larva indicates your queen is doing well also. I wondered if you were looking to do a split this spring? I'll have to read more about the partial reversal--I've been switching my top with the bottom of the 3 mediums. Maybe I should alternate years with the types of reversal?

Hey T, Thanks! I feel much better about being a beekeeper than I did last year. I use to sweat profusely when opening the hive the first year. LOL! Now I think I may be moving too quickly because I feel more confident. I have to remember quick movements can get me stung.

Sam,
Thanks for the info on the aged honey comb! It doesn't sound know-it-all, it sounds like a beekeeper who knows his stuff. I'm glad you shared!

I would never take honey or wax from the hive bodies. I didn't even know people did that. People do that?

From your post I also just realized I made a mistake in the partial reversal. When you asked why I did it, I ran to the manual to reread the info and it says "if you find 3-6 frames of brood then you do a partial reversal." I didn't check all the frames so I'm not sure there were 3-6 frames. I just knew brood were present from the ones I saw and did the reversal. YIKES!!! I guess this is what happens when you are a newbie. I'm learning a lot of things the hard way :( Common sense should have told me that the reversal wouldn't be done unless the queen needed more room to lay, in which case is true if she filled 6 frames. All I can say is I have time contraints stuck in my head and I just kept thinking "partial reversal by mid April." I have to remember our bees are a month behind due to the cold wet weather. I have to learn to read my bees more than I read my manual :/

Jim,
I will definitely be doing a split this spring. I had to go back and take the beekeeping part 2 course to relearn that process because I forgot everything. I'm so nervous about screwing it up. I've contacted natures nectar and they said queens will be ready in May, just in the time for the split. Are you splitting yours in spring?

This is the same info we were given in our manual on the reversal: http://www.tc.umn.edu/~reute001/htm-files/DIVIDES%20.htm

The blog looks great, by the way!