This article represents a very weak attempt by the DNR to blame the wolf, once again, for the decline of moose in Minnesota.  Of course, they don't come right out and say it because then it wouldn't leave room for them to defend themselves from what is very obviously a bias but they suggest it and for those who don't know the facts, the bias is believable.

Pay close attention to some of the quotes from the article:


Minnesota’s dwindling moose herd has a year off from human hunters in 2013, but that doesn’t mean life for the big north woods critters is a walk in the park.
Moose are still being hit hard by disease, injury and parasites, and they are still prey for four-legged hunters that don’t need licenses.

Of 49 calves fitted with GPS-transmitting collars in May, just days after they were born, 11 died from complications immediately after the capture. Most of those were caused by the cows abandoning their calves, not from stress or harm. Four other calves slipped out of their collars, said Glen DelGiudice, lead moose researcher for the Minnesota Department of Natural Resources.

Of the remaining 34 calves being tracked in the study, 24 already have perished in less than four months, a 71 percent mortality rate that has researchers shaking their heads.
On average, in studies worldwide where predators are present, about 55 percent of calf moose die in their first full year.

“It varies a lot based on the predator-to-prey ratio … but we would hope to have about a 45 percent calf (survival) rate after one year,” DelGiudice told the News Tribune.
Predators have been the leading cause of death for moose calves. Bears killed 4 of the 24, most in the first few days after birth, and wolves have taken 16 calves. One calf drowned, two were abandoned later by their mother and one died from unknown causes.

“They are just very vulnerable the first few days and weeks. Since then, the mortality rate has been slowing … but we are still losing them,” DelGiudice said, noting there has been one calf killed by predators in September. “As they get bigger, their chances get better. But they still have all of winter to get through.”

DelGiudice noted that Minnesota had a thriving moose population 10 to 15 years ago when the state’s moose range had roughly the same number of wolves. Wolves clearly aren’t the cause of the steep decline in moose population, he said. But they may now be helping to push the decline a little faster.

“When we had 9,000 moose and the same number of wolves, the number they took was far less significant and likely not impacting the population,” DelGiudice said. “But with fewer than 3,000 moose now, and roughly the same number of wolves, that predator-to-prey ratio has changed. They (wolves) aren’t the driving factor, but they may be having an impact.”

The state DNR and tribal resource agencies have, for the first time in decades, canceled this year’s moose hunt after aerial surveys showed moose numbers had plummeted 35 percent in just one year, with only 2,760 estimated this year, down from 4,230 in 2012. The Northeastern Minnesota population was more than 9,000 as recently as 2006.
Even if calves were surviving at a higher rate, researchers note, too many adult moose have been dying to sustain the population.

The Northeastern Minnesota crash mimics that of Northwestern Minnesota, which saw its moose population decline in the 1990s from about 4,000 animals to just a few dozen. Scientists studying the northwestern moose decline concluded that a warmer climate has compounded multiple other problems, such as disease, malnutrition and parasites.

IN OTHER WORDS, IF WE WANT TO SAVE THE MOOSE WE NEED TO CUT OUR WOLF POPULATION.

Interesting how the DNR leaves out their own statistics on how many moose have been killed by hunters.


In 2012, State hunters harvested 46 moose in northeastern Minnesota (Figure 1). No season was held in northwestern Minnesota. Of the 1,460 parties that applied for this year’s moose hunt, 76 (5%) were drawn and purchased a license (Table 1). Additionally, 11 hunting parties which returned permits last year (2011) prior to the hunt, because of access restrictions caused by the Pagami Creek wildfire, were offered the opportunity to hunt the same zones (20, 24, 25, 62, and 64) in 2012 and all accepted. So a total of 87 licenses were purchased this year (Table 1). Table 1 also lists the number of permits offered by hunting zone, chance of being selected for a permit, and hunter success. The 1854 Treaty Authority issued 49 permits and band members killed 16 moose (11 bulls and 5 cows). The Fond du Lac band issued 64 moose permits (bulls only) of 72 available. The final harvest was 20 bulls (18 by hunters and 2 subsistence/ceremony animals). The Fond du Lac season closed on 31 December 2012.

In 2011, State hunters harvested 53 moose in northeastern Minnesota. No season was held in northwestern Minnesota. Of the 1,963 parties that applied for this year’s moose hunt, 105 (5%) were drawn, and 103 purchased licenses (Table 1). Access to portions of hunting zones 20, 22, 23, 24, 25, 26, 61, 62, 63, 64, 77 and 80 were restricted beginning in September because of an ongoing wild fire (Pagami Creek fire) and hunters in these zones were offered the option of returning their license for a refund. Subsequently, 11 hunting parties returned their license. Table 1 also lists the number of permits offered by hunting zone, chance of being selected for a permit, and hunter success. The 1854 Treaty Authority issued 59 permits and band members killed 10 moose (10 bulls and 0 cows). The Fond du Lac band issued 67 permits and hunters harvested 18 moose. An additional 3 moose harvested by Tribal Conservation Officers for a total of 21 (16 bulls, 4 cows, 1 bull calf). The Fond du Lac season closed 12/31/2011.


FOND DU LAC MEMBERS AND THE WOLF TAKE PRIORITY WHEN IT COMES TO HARVESTING MOOSE!!!  Fond du Lac band members are allowed to hunt moose according to treaty rights, something the DNR is now trying to prevent also. See the correlation between the wolf and Native Americans again?  Let's blame the wolf and tell the Fond du Lac members they cannot hunt moose anymore because the moose numbers are dwindling but let's not talk about all of the non-tribal members that were issued a hunting license all the way up until 2013 even though the DNR WAS FULLY AWARE THE MOOSE WAS MYSTERIOUSLY DISAPPEARING.


The Minnesota Department of Natural Resources is asking the Fond du Lac Band of Lake Superior Chippewa to reconsider plans for an off-reservation moose hunt.

The DNR's ability to stop the hunt is limited although Merchant says a lawsuit is an option.  The band's secretary-treasurer says moose meat is a staple for the diets of band members.

The DNR wants to violate treaty rights and blame the wolf for the loss of moose in Minnesota but never once acknowledges that not only did the DNR issue hunting permits so we (non-tribal members) could continue to hunt moose up until 2013 when the state was aware of their dwindling numbers but they also don't mention that non-tribal members were harvesting more moose than tribal members.  There is also no mention of how tribal members and the wolf rely on the moose for survival or how the DNR's own mismanagement of wildlife has caused this vast imbalance in our (Minnesota's) ecosystem. 900,000 deer and a now suspected 2300 wolves? Now that's an imbalance!

The DNR manages our wildlife purely for hunters and hunters alone.  Their concern for the moose now has to do with their inability go about issuing permits to hunters so instead of looking at the entire picture and trying to really figure out why the moose numbers are REALLY dropping, let's worry about wolves and tribal members.


Let me conclude with some REAL statistics:


Since 2002, Minnesota DNR specialists have put radio collars on 150 healthy adult moose; 119 subsequently died, most of them from unknown causes, according to wildlife officials. Car and train collisions accounted for 12 mortalities, while wolves were culpable in just 11 deaths.

Findings from Minnesota's Interagency Climate Adaptation Team show the state has experienced a 1.5- to 2-degree-Fahrenheit average surface temperature increase over the last 100 years, with the greatest rise in the northern reaches of the state, including primary moose habitat.

Such changes are minimally felt by humans and other native mammals such as black bear, lynx and gray wolves, but scientists note that even minor temperature shifts can affect moose, which are adapted to live in the harshest cold and deepest snow.

The cause of our loss of moose is a mystery but to point to our wolf numbers as a cause of concern is irresponsible at best. Wolves will kill the sick and if our moose are sick then the wolves are doing what nature intended them to do.  It is the DNR's interference with nature that causes most of our wildlife imbalance to begin with.   As for how the DNR is approaching this issue...killing the wolf or violating treaty rights won't solve our moose problems and suggesting it will is ridiculous.  Next time, and there will be a next time, maybe the DNR should stop issuing hunting permits for an animal that is clearly struggling to survive.

Email ThisBlogThis!Share to TwitterShare to FacebookShare to Pinterest
Labels: Environment

My husband thinks I am a total dork for jumping on the whole "bucket list" band wagon but it actually motivates me or at least reminds me of the things I want to do so I am starting a whole new bucket list trend (hee hee)  This time my bucket list is seasonal.  I saw this list on one of the sites I subscribe to for homeschooling worksheets and I thought it would be fun to recreate it, post it here and ask others to jump on board too.

Aiyana and I have decided we're going to try and accomplish everything on the list except for mushroom hunting (because I have no idea what an edible mushroom looks like in the wild and I don't want to poison my family), going to a football game (because I hate football), and feeding ducks (because it isn't good for the fowl.  It is better for them to get their food from natural sources).  We're pretty sure we can accomplish all of the other things on the list and we plan on doing it in pictures so stay tuned :) 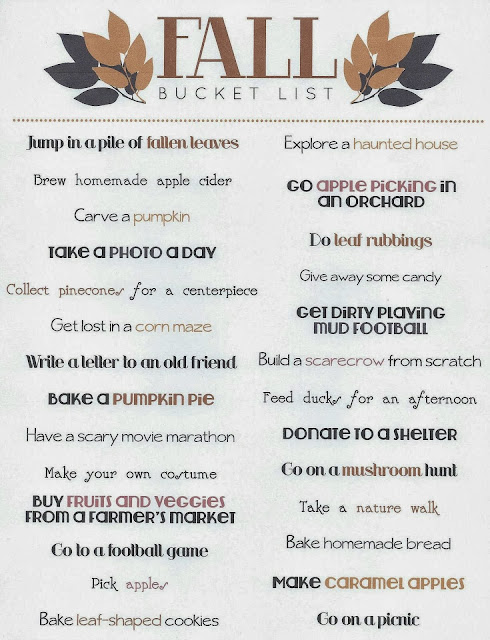 I realize I am lonnnnng overdue for a blog post but I have been trying to get into the swing of homeschooling and figuring out where everything else fits in.  So far, things are going pretty well.  I don't educate my daughter from 9-3 every day like I thought I would, I'm really lucky if I can get her to sit still and focus for 3 whole hours, generally our sit down work ends after about 2 hours.  She's picking things up pretty quickly, I guess not having the distraction of 30 other kids helps.  I do feel a bit disorganized at times... ok, all of the time.  I read the book Home Learning Year by Year and it has made me feel a little paranoid, that maybe my six year old will never learn all she needs to by the end of the first grade, but I'll continue to do my best and only time will tell if I'm doing a good job.  Thankfully we are ahead of the game since my daughter is also enrolled in Kumon and has been since pre-school.

So... that's my homeschooling update for the week.  I'll be back to posting regularly now that I know this process isn't going to kill me. LOL! 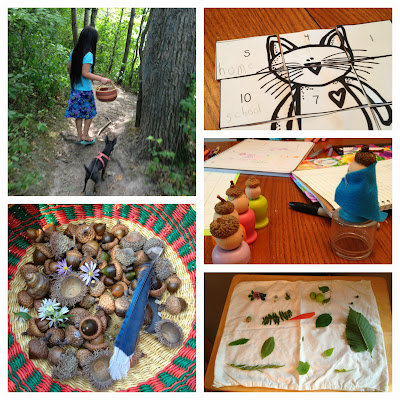 Author: Michelle at 8:09 PM No comments: