I finally moved on to washing the raw wool. The first bag was pretty clean. I wish I knew who I bought that particular bag from because that person takes immaculate care of their sheep. The second bag was pretty awful in terms of lanolin - maybe it has to do with the type of sheep??? I have no idea.

So... part one: pick through raw wool to get rid of particles like hay or poop. Part two: wash wool.

I thought I ruined my first bag of wool because it looked felted when I removed it from the wash basin but once it dried it was absolutely fine. A few felted spots but not too bad.  The second bag I didn't poke at as much so it didn't felt at all but I have to admit that I really don't like the color. I wanted wool I could dye and the second batch doesn't seem suitable for that.

I used a mesh bag to put the wool in. I learned quickly that I put too much wool into the mesh bag, should have just used a few ounces or else a larger bag.

I filled the basin with water at a temp of 130 F and added the fleece scour solution.  Lastly I added my little bag of wool and watched as the water turned fro clear to a yucky yellow. The whole house smelled like sheep butt thanks to the steam coming off the water. That's ok though because I love sheep butt :-)

I turned the bag a couple times in the 30 minute soak and then transferred the wool to another basin full of clean water and fleece scour and turned once in 15 minutes. To finish I put the wool in a clean rinse basin and pushed it around a few times until I felt the wool was free of the fleece scour solution. 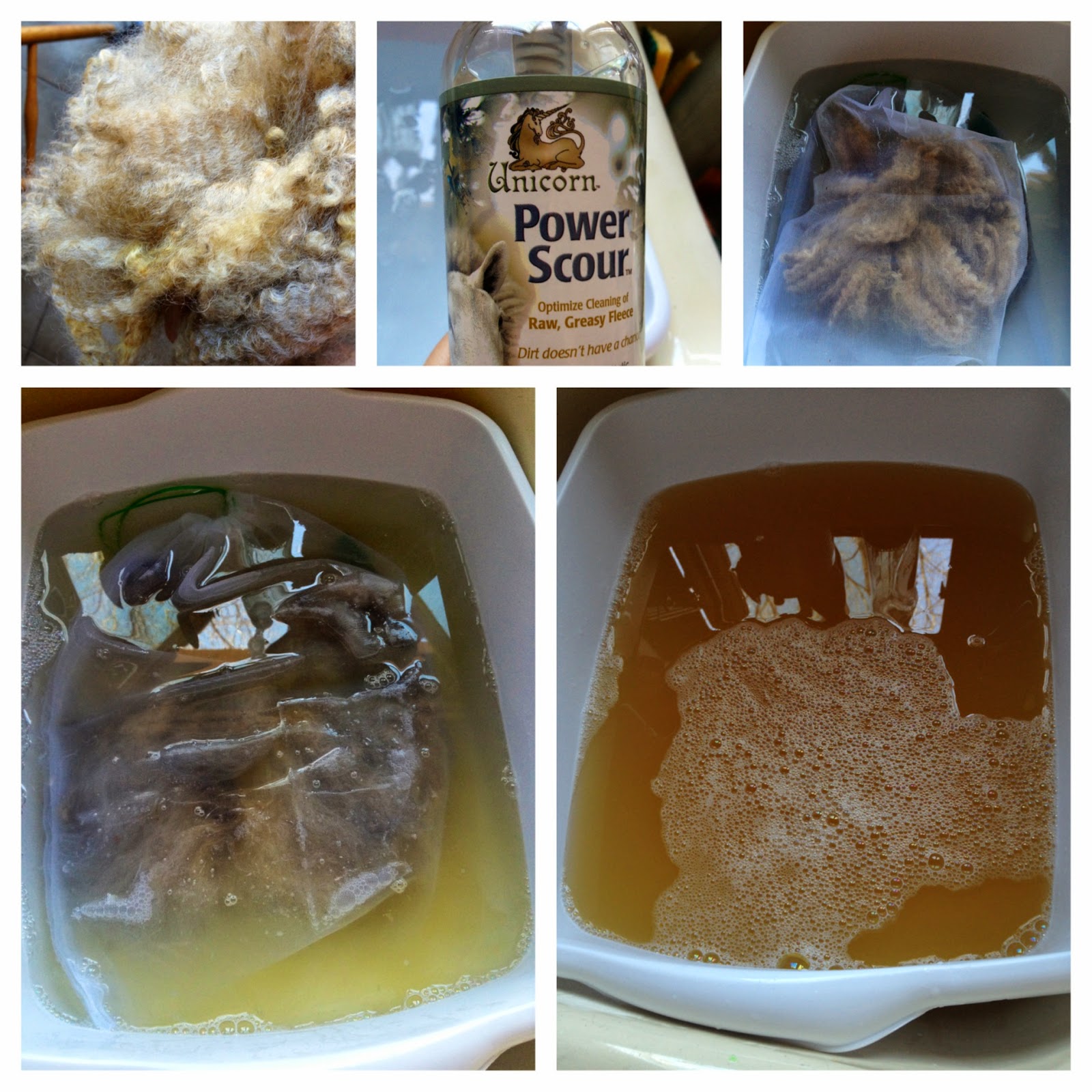 When done I just let the bag sit in the sink and drain out, when it drained as best as it could I dumped the wool onto a towel and let it sit until it was no longer wet. Once dry I pulled it apart. Now, I have no idea if pulling it apart will make it difficult to card since I am new to all of this but I'll soon find out.

Carding will be part three :)

You are a brave soul to even attempt this! I keep saying I would, but I haven't made the time for it. Hubby also scrunches up his face at the thought of my washing poopy wool in the house. LOL! Your hubby is a lot more understanding.

Teresa, he made me promise not to do it in the kitchen sink. lol!

Wow, that's a lot of work, I don't think most of us appreciate all the effort that goes into making wool. Certainly I didn't until you posted.

The first bag of wool is gorgeous! But to have your house smelling like sheep butt, that's got to be unique. :D

Could it be washed outside (when the weather's nice of course) so your house doesn't smell like wet (sheep)dog? Can we name your house Sam? ;)

Yeah, I think I'll do it outside next time. I'd like to get a metal double wash basin that I can use outdoors so that the house doesn't smell like livestock. My hubby thinks I'm crazy when I do all of this inside. He's afraid I'll turn the kitchen into a barn. lol!

I am pretty shocked that yarn doesn't cost more than it does considering the process, especially when it is hand spun. Spinning takes me foreverrrrrr! I need to improve that part.

This is definitely an undertaking. I've done it myself. I'm curious - where did you find the cleaner you used? I've done this process, but I used blue Dawn dish soap. I liked it but my wool was so silky it was hard to card & spin. Also, I used a cheap salad spinner from IKEA to speed the drying process without felting the wool.

I agree - I'm amazed wool doesn't cost more simply because of the cleaning process. But it is kind of gratifying when you can look at something you worked with from the very start!

I ordered the Unicorn Pour Scour from their manufacturer. They were selling it at the Shepherd's Harvest last year and the vendors were telling me it was a great product for washing wool so I ordered it when I was ready to work with the wool. Here is the website: http://www.unicornfibre.com

It is awesome stuff. Cleans the wool really quick. As soon as the wool touches the water the yuck pulls away.

Great idea about the salad spinner!! I'll have to try that. I set the wool out on a towel and it took foreverrrrr to dry.

It is cool to see once it is all clean and dry. Totally different color than when it was dirty, that's for sure and smells like the fleece scour, which I like.