Alkanet Root: Ambra asked me how this colorant aged and so this picture is for her :) I blogged about this colorant in July. It ages well! The picture is from today. BTW/I hated this soap. The colorant was great but the EO combo I used ended up making the soap smell like coca cola. I had several people sniff it and all had the same response... "COKE."

Yuck! Who would want to use a bar of soap that smells like coke? :( 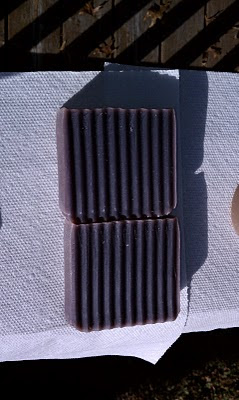 Honey: this bar of soap is more than a year old. It was a honey oatmeal soap. Honey holds as a colorant. I think it faded slightly but only SLIGHTLY! I do think you have less control with honey as a tan color than you do with hibiscus. 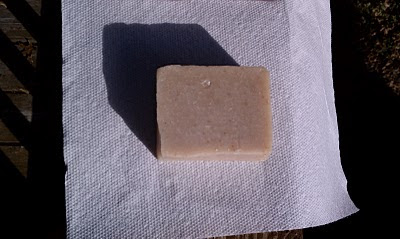 Parsley: I do not have this soap to reference but I will say this...I find parsley to be kind of tricky. I've had it last a long time to not lasting at all. I'm thinking it definitely depends on the fragrance used. I've used parsley in recipes that were the exact same aside from the fragrance. It seems recipes with EO faded the fastest and recipes with synthetic fragrances lasted the longest.

Hibsicus: You get various shades of tan depending on how much hibiscus you use so I've used two soaps here for reference. The round soap is the darkest because I used twice as much hibiscus. This soap was made back in May 2010 and the picture is from today. The lighter tan soap was made in early spring 2010 and as you can see, the color is still holding very well, hardly any fading. I used only half as much hibiscus in the lighter soap as I did in the darker soap. This colorant does very well over time! 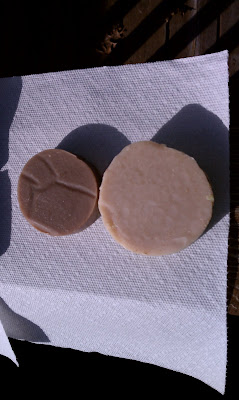 I apologize for picture quality. I took these with my cell phone. That is my new thing, to blog with the cell phone. LOL!

Jennifer Young from Jenora Soaps was very generous to share some of her own natural colorant experiments with me. Here are her comments:

Can I add from my experimenting - Annatto lasts. Nettle seems to be lasting. Goat milk tan lasts. Alkanet lasts (I agree with you). Coffee, cocoa & cinnamon last. Pink Clay and Green Clay last. Carrot Tissue Oil produced the most beautiful yellow for me that DID NOT last - it turned very faint. Spirulina does not last. So far that is about it! Glad you are back! xo Jen

Pixie, great post! I love the alkanet colour, but how on earth did you get it this dark? Or is it a trade secret :) I love the idea of blogging with a phone. I'm saving up for the new version of THE phone (when they get it right, hopefully, eventually) and then I'm sure I'll use it to blog.

I think it's super cool that you came up with an eo combo that smells like coca cola!! Very interesting results on your colorants too! Especially the parsley. Too bad it doesn't stick as well with the natural eo's. :(

Funny that I'd read this today. I literally just started infusing 5 oils today: kelp, spirulina, annatto,charcoal and alkanet! I'm getting ready to go on a natural soap colorants bender next week =)

Can I add from my experimenting - Annatto lasts. Nettle seems to be lasting. Goat milk tan lasts. Alkanet lasts (I agree with you). Coffee, cocoa & cinnamon last. Pink Clay and Green Clay last. Carrot Tissue Oil produced the most beautiful yellow for me that DID NOT last - it turned very faint. Spirulina does not last. So far that is about it! Glad you are back! xo Jen

I'm not exactly sure why it comes out so dark. No trade secrets :) I use quite a bit (6 tpbs) and warm it in oil on the stove for 5 minutes. I cover it and then strain it the next day. Maybe letting it sit over night brings out more of the color?? I'm not sure. I do use palm with this recipe as well. You'll love blogging with the phone. They have app's just for blogger and they work well. I just wish I could type faster on my phone. LOL!

Amy, it was a blend I purchased. I won't do that again :( It was lime and something else. I'll go back and look at the bottle and post it in case others are interested in coke soap :)

Anne Marie,
I look forward to reading about your natural colorant experiments! Especially the kelp. There are a few that I've struggled with hiding their natural scent :( Paprika being one of those.

Jennifer,
Thank you so much for sharing! I'm going to post your response to the main page, lots of great info!!!

Hm I'm curious, what blend of fragrance did you use that made your soap smell like coca cola?

I love the deep purple of Alkanet Root. Even if you didn't like the scent, the soaps look great!

Yay! Didn't have to wait til tomorrow. I found it listed on the receipt. Vetiver, Bay, Lime :) I was wrong, it was 3 EO's.