TO PIERCE OR NOT TO PIERCE...THAT IS THE QUESTION

I recently took my 16 year old to get her nose pierced.  The response to having actually allowed my teenage daughter to pierce any part of her face other than her ears is quite interesting.  I'm the cool mother to  my daughters friends and those working at the piercing shop but among other mothers whose teen daughters now want their noses pierced after seeing my daughter, I'm not so awesome.

I remember my own mother had rules about such things.  I wasn't allowed to pierce or tattoo anything, I wasn't even allowed to wax my eyebrows or dye my hair, but that's a whole other topic.  I got my first tattoo when I was 18 and managed to hide it from mom until I was 21.  I got my nose pierced when I was 26 and displayed it proudly (it took me that long to stop fearing the wrath of my mother).  I decided when my children came along that I'd be a little bit more open minded.  I would never sign for a tattoo but I think nose piercings are really cute (and luckily not permanent). 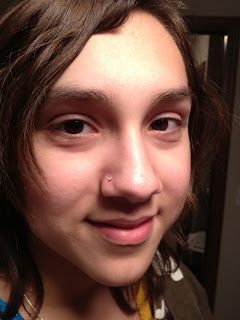 I also like ear piercings.  In my husbands culture babies get their ears pierced within 3 days of birth.  Since  midwives and OB/Gyn's aren't really accustomed to that practice I had my oldest child's ears pierced down in Mexico by a family friend when she was 6 weeks old.  Our second child had her ears pierced at 8 weeks old by our pediatrician.  When our last child came along I had decided I'd let her decide if and when she wanted her ears pierced.  Well, shortly after turning five she said she wanted earrings like her big sisters.  I made her wait until she received her vaccines and told her if she could take the pain of the vaccine then I'd let her get her ears pierced.  So, she took the three shots like a trooper and we got her ears pierced.  She did NOT take the ear pain experience like a trooper but she loves her earrings and made me promise she'd never have to take them out :) 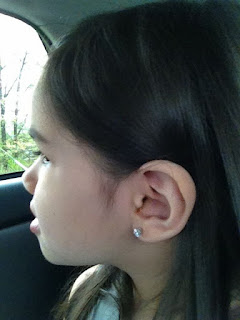 Yesterday she says "if I'd known this piercing was so high maintenance I wouldn't have done it" (referring to the number of times she has to clean it every day).  I guess we'll see how long it lasts :D

Email ThisBlogThis!Share to TwitterShare to FacebookShare to Pinterest
Labels: family

How nice of you! My mom would never had let me do it. She didn't want to have more then one ear ring either. But when I was 16, I went ahead (we could do that without parents authorization at that time in Europe), and got a second ear piercing. I thought I could hide it, but the same day she saw it. She wasn't angry or anything... But she added "NOT IN THE NOSE!". But I wasn't interested to have one in the nose...

Isn't it funny how we as teens thought we could hide things from our mothers. lol!

I think it looks great! Once she feels it's not something she wants, she can easily remove it too.

You are a pretty cool mom!

This is too funny, I will be there someday. Until then I can read your posts and learn from you!

The folly of youth :)

My thoughts exactly! Simple piercings don't have to be forever.

Ah yes, the older they get the more challenges they throw our way. I always told my hubby that the best age is the age where they just do everything we say :)

Nose piercing remind me of the Indian (real Indian, not Native American "Indians") culture. Looks great on her! I totally know what she means though. It is a pain to keep things like that clean. I remember my ear piercing being somewhat infected and that gross. :P