I'm wayyyyyyyyy too emotional to be a beekeeper. I crushed a bee and I really hate that but what makes me feel sick is the fact that things aren't going according to the book. I inspected the hive again today and things are happening that I either forgot what they mean (which is probably the case) or didn't learn (less likely the case). I found drone cells, about 5-10. More frames are FULL of honey, no queen in the third hive body yet and no brood. I know beeks are suggesting I rearrange the bottom two hive bodies and I plan on doing that the next sunny, clear day (hopefully tomorrow) but for now I'm just flustered because I have no idea why this isn't working out the way we were told it would in class =(

Anyway, I have some fun pictures.

Hubby saw a bee on a plant in front of the hive. She was checking him out while he's checking her out. LOL! 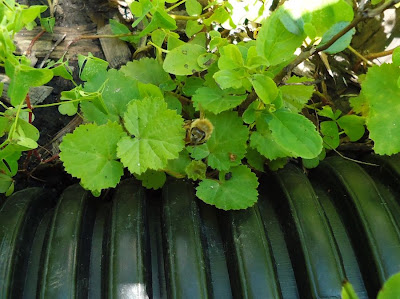 Here is some beeswax that we pulled off the bottom of the frames. It is white until it ages, then turns yellow. 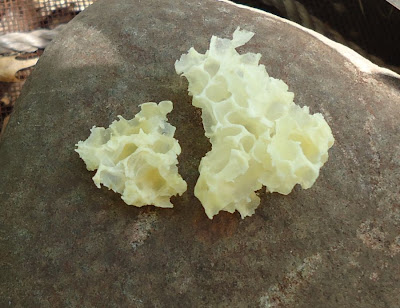 Can you see the little drone cells? The drones are the males and their cells are puffy instead of flat like the females. 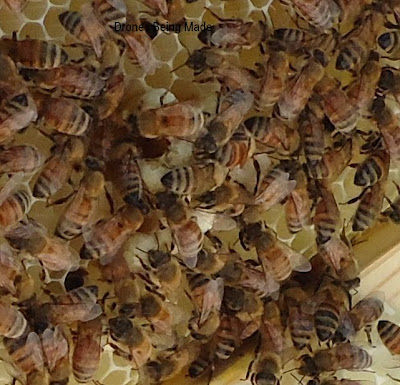 Lots of honey being made. I was tempted to lick the frames but I could just predict how that one would turn out. LOL! 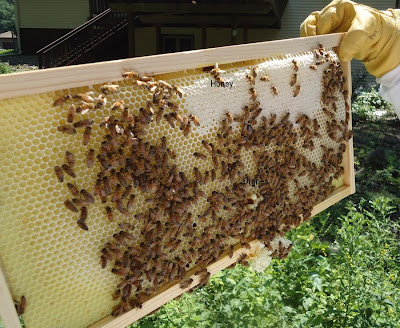 The famous PROPOLIS. We have very little right now but I've heard from other beeks that the bees will create more and more and things get much stickier. They used it to seal two frames together, which I popped apart with my hive tool. 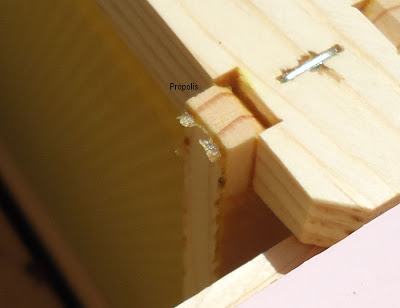 Under the Willow said...

Great pictures Michelle-- I'm learning so much- and it's fun because I don't have to have a "hive" to enjoy all this....I am just beginning to become a wee bit-less fearful of bees.

Michelle, You sound so passionate about your bees that it is inspiring! Although I don't often comment here, I continue to read all your posts anxiously... xo Jen

I hope you'll be able to figure out what's wrong though.

Carrie,
I'm glad you are becoming less fearful and that some of what I'm sharing educational. It is amazing how much bees have to teach us. I am more fascinated by them every day. They are also becoming somewhat predictable, as far as temperament is concerned. I've learned the valuable lesson of NOT visiting the hive on rainy or cloudy days. LOL! Sunny and clear days they are very happy and relaxed.

Jennifer,
Thank you for following along! I really do love the bees. It is amazing how much a little insect can bring to ones life :)

T,
I hope so too. I'm thinking I have no choice but to rearrange those bottom two hive bodies but the words of my instructors saying "just do as we instruct and things will be fine" keep ringing in my ear and they didn't instruct rearrange the two bottom hive bodies :(

I'm so glad I discovered your blog. I started beekeeping in April of this year and everything was going so well ... until last weekend when I had an incident that scared the stuffing out of me. Long story but I think (after talking to 4 experienced beekeepers---which I should do much, much more often) that I was seriously underfeeding my girls. In the Wash DC area we're undergoing a huge dearth and it's been very hot. Result? suddenly very angry bees chasing me and my husband from our yard. AND a neighbor with a swimming pool (grrrrr) that he uses exactly twice a year was using it Sunday and all I could think was "some poor little grandchild of his will be stung and will die of anaphylactic shock and IT'S ALL MY FAULT!" I can soooo relate to your comment: "I'm wayyyyyyyyy too emotional to be a beekeeper."