I KILLED LOTS OF BROOD TODAY! 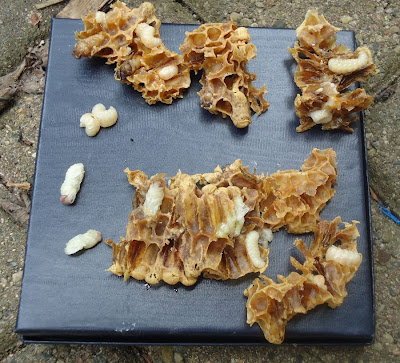 The only thing keeping me from throwing in the towel on this beekeeping venture is thinking that the death of all these brood really wasn't my fault. My hubby likes to tease me about it but I just didn't see any other way.

We did a partial reversal on our hive as many experienced beeks suggested we do. It wasn't in-line with what I learned at the University but what was happening with my hive wasn't what I learned at the University either. We were instructed to do a full reversal on the hive before fall, ONLY after the third hive body was filled with brood. Well, we have nearly 5 full frames of honey in the third hive body and yet we have no queen or brood in there. My mentor said my queen must be getting squeezed in that 2nd hive body (he actually told me this a few weeks ago) and yesterday told me to get my butt out there and do a partial reversal.

Hive body 2 would go in the place of 1 and vice versa. We removed hive body 3 and set it aside, we removed hive body 2 and that is when we saw the massacre. My bees had drawn out comb on top of the frames in hive body 1 and below the frames in hive body 2 and the queen placed brood there. I'm thinking this means the queen ran out of space and her tribe was creating new space for her to lay in. The sad part is, when hubby lifted the 2nd hive body it exposed the brood. I figured, and maybe I'm wrong, this brood was now dead so I took to scraping the comb off the top of the frames and in turn that also removed the brood. What makes it even sadder is the nurse bees weren't given up. They kept tending to this exposed brood and here I am 10 minutes later sitting at my computer, looking out the window and the brood I scraped off and there are still nurse bees tending to them.

I hope I did the right thing by scraping them because, and I don't know if any other beeks ever looked this closely, but one of the larvae is moving. The pupae aren't moving but oh yes, that lavae is :( 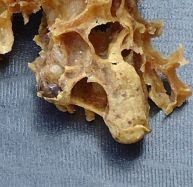 Michelle, I totally sympathize with your feeling bad about killing the bees. I feel bad too when I accidentally squish some setting a box back in place or using the hive tool to separate some frames where the bees have made a bit of a mess with their honeycomb development. However, it happens, and some are going to die whenever you open up the hive. I just try to be as deliberate and careful as possible but there is no denying--some bees will die. As for the 3rd hive body, you may never see the queen or brood there and that is just fine. Typically she will be in hive bodies 1 or 2. I wouldn't go messing with things for awhile--I'm sure they are doing fine, given the growth you've had. I did a reversal of #1 and 3 this spring, but reversing now seems a bit odd, unless you are honey-bound which I really think is probably not the case. I'd back off awhile. No bees will die and they will be just fine.

Do you think everything will be fine even though I reversed the 1 and 2 hive bodies?

I'll stay out of their way now for a while and let them do their thing. Thanks for the reassurance and the advice :)

I also killed a lot of brood recently --- it was in some burr comb that the queen used to lay a lot of eggs in before I discovered it -- and it was sad BUT educational. It was about as much as you show in the top picture, which isn't much, relatively speaking. I watched over the next 24 hrs and some of the bees emerged from their cells and seemed capable of living...but didn't. The larvae moved for a long time, but I got to see their eyes and now I know the difference between eyes and mites. That's an important thing to learn, I tell myself, and therefore worth the destruction I caused.

I'm too am having a hard time with the emotions of this beekeeping. I got a harsh lecture this week from the man who sold me my nuc. He was raised on a farm and has been tending bees for 50+ years. The lecture was about how suburbanites (that would be me) and urbanites think they can take a course, read a bit on the Internet, and presto they are capable of being beekeepers. He argued that to raise bees properly you have to think like a farmer and you have to treat the bees like livestock. Although it felt like a tongue-lashing, I think the tirade did me a bit of good. After my bruised ego healed a bit I thought, well, I guess I do have to be more farmer-ish about all of this.

I've had some problems lately with my hive and on Wed night, at the monthly beekeepers meeting I go to, I spoke up (for the first time) and told the group what was going on in my hive. There was a chorus of "re-Queen! re-Queen! You have to re-Queen!" They all were so sure that this was the solution, but I wasn't convinced. After the meeting 2 people asked me for a few more details and suddenly both of them were saying "oh...no, don't re-Queen. Feed more." So there you go. Unless someone is looking into my hive with me, I'm not sure random advice is worth much.

This is all making me feel like such a dummy and such a failure and such a fool. Who knew? Two weeks ago I was ecstatic about my beekeeping. Now I'm just depressed.

Ohhh, ewwww, poor things and poor you to have to deal with that! :(

Lol, don't worry about the dead bees, bees always build comb between frames like this most often they will put brood there to, just make sure the queen isn't there when replacing boxs, I wouldn't scrape it off ether since they will just put it back, also bees wont "tend" dead larva most often they will cannibalise them, taking any useful juices. often when I see crushed larva the bees will lick up the mess then remove the corpse, remember they are pragmatic creatures. As far as understanding hive structure I like to think of it as a 3d ball represented by sheets of comb, the middle sheet has the most brood outer sheets the least, like an onion center brood, wraped in pollen wraped in honey. Since I don't use the same system I'm not sure what you mean by reversal, bees will naturally cluster, in preparation for winter, in the fall the important part as I understand it is to get the cluster at one end of the hive structure so when they move through their honey stores during winter they will move in one direction. My suggestion take a breath, or two, relax maby read up a bit on beekeeping systems and theory. I suggest this site www.bushfarms.com/bees.htm, also a nice forum for all kinds of beekeeping www.beesource.com don't give up yet, especially don't give up because you killed a handfull of larva!