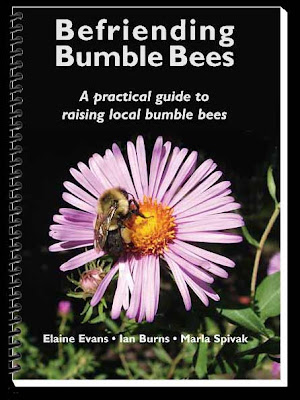 My two daughters (mainly my oldest) are going to try and attempt keeping bumble bees this year.

Bumble bees are endangered the same way honeybees are. Their numbers are dwindling and the cause is unknown although the suspected cause is pesticide use. Without bumblebees there will be inadequate pollination of certain plants.

Although bumblebees are kept commercially to pollinate crops my children are going to do it for the same reason I keep the honeybees, for the love of nature!

Unfortunately there is just a 20-50% success rate getting a captured bumblebee to lay eggs, so from the start it is a challenge. Bumblebees are also a bit picky about the climate, preferring 50% humidity and temps above 70 degrees F. The girls sure have their work cut out for them but hopefully in the process they will learn a lot about this very beneficial insect and we certainly aren't in short supply around here. The bumblebees love my roses.
Author: Michelle at 3:41 PM 5 comments:

My hive has grown 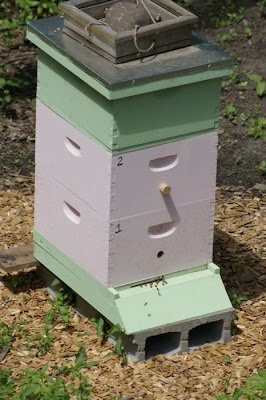 Mia and Joy watching as I open the hive 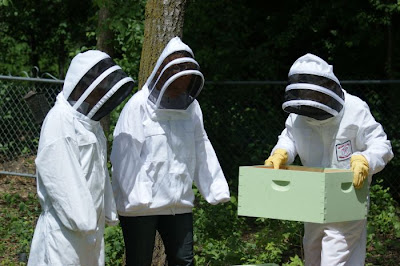 The bees are busy taking care of the babies 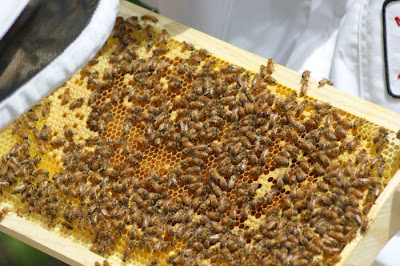 Joy and Mia checking out one of the frames 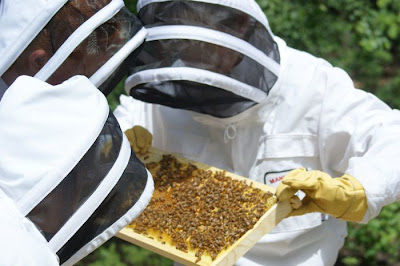 I'm not 100% sure I should have added the 2nd hive body but since the bees went from covering 5 full frames to now covering 8 full frames (some weren't fully drawn) in one week, I thought it best to add another one. I can't believe they made that much progress in less than 7 days.

I was feeling really good about doing inspections and such but this time it felt a little scary. There were twice as many bees as before and I think I killed a few :( At one point the bees got really really pissed (I hope I didn't kill the queen) while I was putting a frame back in place. I've never heard them buzz as loudly as they did right then. On top of being nervous with all the buzzing going on it was hot outside so I was sweating something fierce. Plus, Joy and Mia were here and I wanted to make sure I didn't rush through too quickly so they would be able to see a few things. Hopefully their experience was good.

2nd hive body is in place, moved to the 2nd larger size opening in entrance reducer and pulled the cork in first hive body. Time will tell if I messed things up (7 days til next hive inspection).

Funny. When hubby saw how many bees there were he gave me "the look" and said "what have you gotten yourself into." Which caused more droplets of sweat to form above my brow.
Author: Michelle at 11:57 AM 10 comments:

BEES ARE IN FANNING MODE

It was really hot today (94 degrees F) so the bees having been in "fanning" mode (see earlier posts for "fanning" video). They are all perched near the entrance of the hive "fanning" their wings in order to cool things down.

I'm really fascinated by this since to me it is quite foreign. The idea that bees can fan outside the tiny hive entrance and actually cool the hive down is beyond my comprehension. How do those little wings generate enough wind to cool anything? How does the wind from their wings get into that tiny entrance? Once again, this fanning reminds me how amazing these little creatures are.

It is difficult to see the "fanning" in a picture since you can't make out the movement of wings but there are a couple of bees on this photo where you see thier wings are a bit blurry they are fluttering so fast. The others facing the hive were also fanning but it isn't quite so clear. 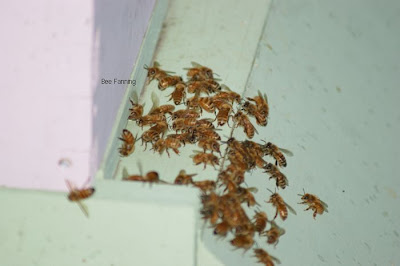 (this is what remains of the bees outside of the hive since propping the outer cover up a little bit). I want to close the outer cover but on the advise of more experienced beekeepers I've decided to wait until morning. Of course I won't sleep a wink, I'll be worried about the hive cover blowing off. I'm such a nut case!
Author: Michelle at 6:50 PM 2 comments:

My BEES ARE FRYING

My poor bees are overheating (94 f outside). They'd rather be outside than in. Not sure what this means??? I was told in beekeeping class that we can't move to the 2nd largest opening in the entrance reducer until we add the 2nd hive body, nor can I remove the cork until adding the 2nd hive body but my little bees are baking. Will they leave if I don't provide more ventilation? I'm soooooooooo tempted to remove the cork in the hive body but what if their numbers are too low to defend themselves from intruders? 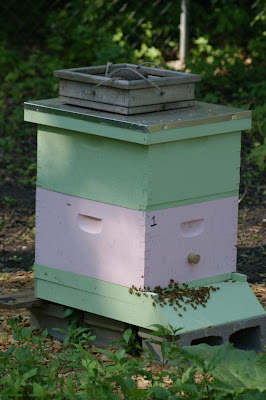 UPDATE:
I went and propped the outer cover up a bit with some sticks and so far the cluster has diminished a bit (great!). There are still quite a few bees at the entrance (much more than usual), looks like they may be fanning (I didn't get close enough to tell). My bee mama skills are lacking since when I opened the cover I discovered they were out of sugar syrup and they were clustered around the sugar jar as well (poor girls). I feel badly about that :(
Author: Michelle at 3:05 PM 5 comments: 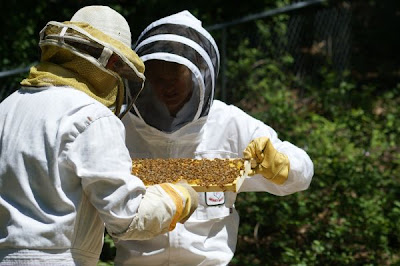 Yesterday my beekeeping mentor came over to help me find the queen bee that I thought died. He was nice enough to check on the activity in the hide, explain rotation of frames again and help find the queen. I was relieved when we hit frame #6 that there was a live and laying queen. She was not happy about being exposed to the light so she was somewhat burried under a pile of nurse bees.

This was the first time I witnessed bee "fanning" and bee "dancing." Both of which were super cool to see. One little bee at the entrance was fanning and several bees were dancing about in the hive (shaking their tail feathers at their sisters). BTW/bees don't have feathers I just thought it would be cool to type that. Anyway, all is well in casa de bees. Won't be long now before a new hive body will need to be added :)

LAZY BEES or MISINFORMATION? YOU TELL ME.

For starters, my bees don't even come close to lazy. I personally think they are just night owls and need their beauty sleep but...

My bees are not even raising their weary heads before 8 am. I check on them every single day and they don't rise until around 9 am. Maybe one or two are willing to face the cool morning temps (which are in the high 50's to low 60's right now) but the others like to get their morning coffee and head out the door around 10 am.

You'd think I would follow the second part of what I heard (most bees are out foraging between 10 am and 2 pm) but my girls aren't ready to come home at 2 pm. The bulk of them return much much later. Although many are still busy working as the sun is going down, the majority seem to return home around 5 pm.

Author: Michelle at 3:50 PM No comments:

WHOSE GUARDING THE DOOR?

Since the beginning of beekeeping class I've heard and read a lot about guard bees. You know, the little troopers that sit at the entrance to the hive ready to defend their sisters and brood with their life. Apparently, guard bees will confront the beekeeper or anything/anyone else if they get too close.

The day after hiving my bees I've looked for these so-called "guards." Maybe on occasion I'd see one bee at the entrance but when I'd approach the hive she would do little if anything. I had one come and check me out once but I held the outer hive cover in front of me and she went away. We've been approaching the hive, sometimes within inches, checking on bee behavior for weeks now and not a single bee seemed to mind. I had to wonder, was the hive I provided for my bees actually being guarded by anyone? Was this normal for there to be no "guard" bees? Maybe there was a guard but she remains unnoticed until absolutely needed? Do they stay hidden away with just their eyes peaking out until they are needed? I had a lot of questions about this until today.

This morning I took out the handy dandy binoculars to spy on my little girls and I noticed a cluster of bees at the entrance. Nothing unusual really except that within the cluster there appeared to be a handful of bees that were neither coming or going. They were just hanging out. I waited a few hours and checked again and sure enough, several bees at the entrance and they seemed to be checking out other bees that were coming and going but they themselves were just "hanging out." I noticed a little bit of this yesterday with one bee. She hung outside in front of the entrance and it looked like she was sniffing everyones butt as they came and went. Now today we have several butt sniffers.

I'm guessing that these are the "guard bees" I've heard so much about. I haven't tested it out yet since testing would require me approaching the hive to see if anyone comes out to shoo me away. Since I just stressed the girls out by blowing smoke on them and poking inside their home only a few days ago I'm holding off another inspection or "test" for a few more days. But I have a strong feeling that those five frames of brood have started to emerge and the girls are a little bit more defensive of their hive than they were before.

Maybe I'm wrong but I'll find out for sure in a few more days.
Author: Michelle at 3:34 PM 1 comment: